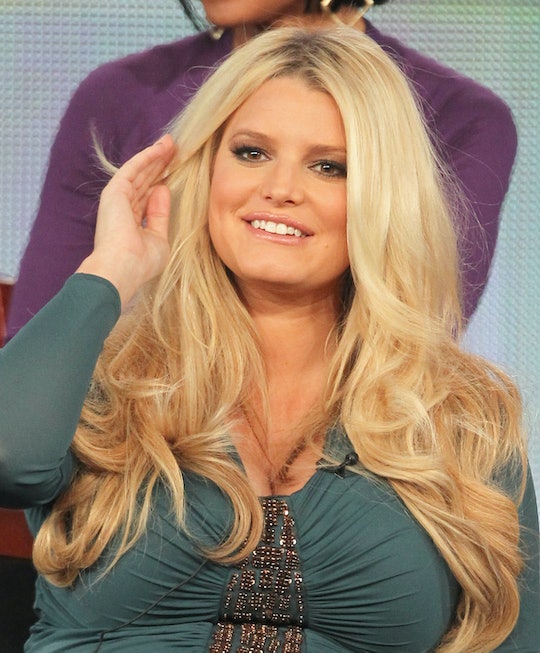 It's become almost de rigeur to share some of the less glamorous details of your pregnancy on social media, and I think it's splendid. Because pregnancy isn't all glowing and baby showers, cute maternity clothes and resting your hands serenely on your belly. It's messy and uncomfortable a lot of the time, and I think it's great that so many celebrities are opening up about their struggles. But I admit I think it's mostly great when Jessica Simpson does it. I believe her the most, because Jessica Simpson's toilet seat struggle during pregnancy might not be ideal, but my God did I enjoy it.

The singer/fashion designer is currently pregnant with her third child, a little girl she is reportedly planning on naming Birdie, according to People. She and her husband, former NFL player Eric Johnson, are already parents to 6-year-old daughter Maxwell and 4-year-old son Ace. Simpson might have thought she would know what to expect with her third pregnancy since she'd already done it twice, but perhaps not. Because this pregnancy has been a pretty wild roller coaster for the mom, and she has been kind enough to share her misadventures with all of her followers.

Including a recent unfortunate mishap with a toilet seat.

That's right, folks. The poor woman broke a toilet seat and then shared it on social media. Which is next level real, if she keeps this up she's going to start giving Chrissy Teigen a run for her money. As she explained on Instagram: "Warning...Don’t lean back on the toilet when pregnant."

I mean... yeah. That's rough. But boy did Simpson's followers appreciate her honesty, her humility, and her sense of humor, sending her messages of support.

"I’m so so happy that you can find the funny in this pregnancy! You’re so great," one fan commented.

Another chimed in, "You are doing a remarkable impression of me when I was pregnant last year!! Love you!""

The hits just keep on coming with Simpson and her pregnancy woes, apparently, because just yesterday she shared a picture of herself in a recliner with the caption: "Severe pregnancy acid reflux has led to the purchase of my very own sleep recliner."

And of course, how could anyone forget her swollen ankle "10 Year Challenge" from January? When she compared her legs from 10 years hence to her current situation.

Throughout her pregnancy Simpson has struggled with acid reflux, broken toilet seats, swollen ankles, insomnia, anxiety, a bout of bronchitis... essentially, it's been a mixed bag of pretty terrible tricks. And let's not forget she is still trying to raise two children and run a company at the same time. How does she do it, you ask?

With her amazing self-deprecating, lighthearted sense of humor perfectly in tact. She clearly doesn't take herself too seriously, and the baby will be here within weeks. So why not just surrender to the embarrassing moments instead of trying to hide them? Clearly everyone prefers it that way.