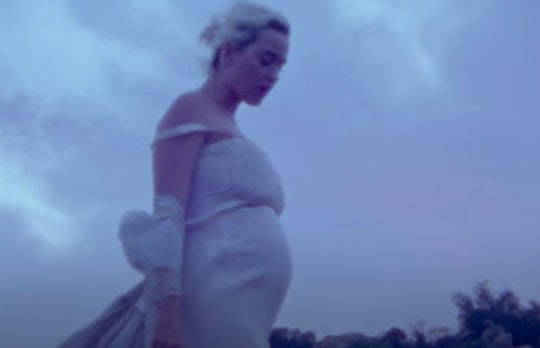 In a brand new music video filmed during quarantine for her song "Daisies," Katy Perry revealed her growing pregnancy bump in a beautiful and dramatic way. The 35-year-old singer, who is expecting her first child with fiancé Orlando Bloom, unveiled her new single on Friday and looked as gorgeous as ever.

In the video, Perry is in an ethereal white dress while she holds her growing pregnancy bump and sings about how she will never give up on her dreams. "They told me I was out there, tried to knock me down, took those sticks and stones, showed 'em I could build a house," Perry sings. "They tell me I'm crazy, but I'll never let 'em change me, 'til they cover me in daisies, daisies, daisies."

At one point in the music video — filmed by director Liza Voloshin from a safe distance, according to Us Weekly — Perry strips bare in a river and holds her bump. Perry revealed in an Instagram post that she wrote the song months before the pandemic, but the song has a new meaning for her now. "Each of us is one in more than seven billion, with our own story of strength and resilience to tell," she said. "I hope it will be the soundtrack to going for your dreams now...especially the ones we left behind."

"I wrote this song a couple months ago as a call to remain true to the course you’ve set for yourself, regardless of what others may think," she continued. "Recently, it has taken a new meaning for me, in light of what the whole world is experiencing."

In an interview with on New Music Daily with Zane Lowe on Friday, Perry revealed that her album is done, but there could be more new music to come in the upcoming year after she gives birth. "My whole life is about to change and I'm sure I will have a whole new access to different emotions I never had, and will be able to write from, so I'm going to write a whole 'nother record, probably when that happens," she said.

Perry is due with her first child sometime this summer. Earlier this year, she revealed that she would be welcoming her daughter and her album, which will be released in August, in the same season, so the countdown is officially on. Until then, hopefully she keeps documenting her pregnancy in these beautiful and creative ways.