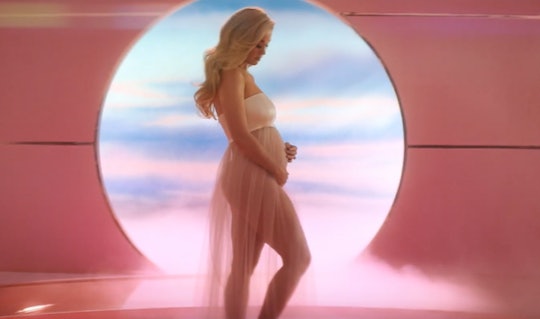 Pregnant Katy Perry Revealed A Big Hint About Her Due Date

Not too long after she announced that she's expecting her first child with fiancé Orlando Bloom, Katy Perry also kinda revealed when she's due to give birth to their bundle of joy. The 35-year-old singer broke the exciting news when she debuted her bump in the music video for her new single "Never Worn White," and later revealed a few more details about her pregnancy on Instagram.

One of those deets was a big hint about her due date. After the music video's premiere on Wednesday, Perry did an Instagram Live video while feasting on dried mango and told her fans her due date is sometime this summer, around the same time as the release of her new album.

"There's a lot that will be happening this summer, not only will I be giving birth, literally, but also figuratively to something you guys have been waiting for," she said on Instagram. "Let's just call it a double whammy. It's a two-for."

While a release date for Perry's new and currently untitled album has not yet been announced, her comments on Instagram suggest it's right around the corner. And though Perry didn't reveal a specific month or day she's due, her "summer" hint seems to indicate that she's currently in her second trimester.

"I am excited, we are excited and happy, and it's probably the longest secret I've ever had to keep," she went on to say on Instagram. "And I'd like to tell you guys everything, but I knew I would tell you guys in the best way."

Perry reiterated in her Instagram Live video that she is due later this year after she told her fans that her dog Nugget would "lose it" this summer when there's a new baby in town. She also said that she was excited to "release a lot this summer" and "share it all" with her fans.

It's safe to say that this will be a big year for Perry and Bloom, who shares a 9-year-old son Flynn with his ex-wife Miranda Kerr. After the couple got engaged on Valentine's Day 2019, Perry previously said that she has been busy with wedding planning, although they haven't confirmed a date yet.

Until her somewhat mysterious due date arrives — June, July, August... who knows! — hopefully Perry will share more glamorous bump photos and fun details about her upcoming bundle of joy.