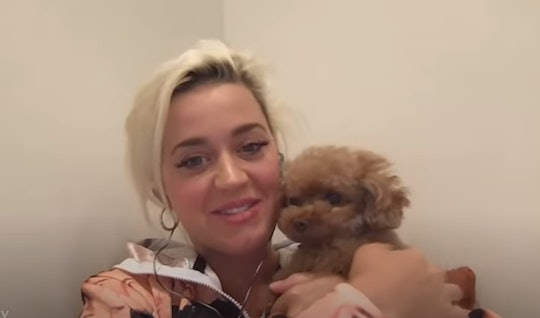 Live with Kelly and Ryan/YouTube

While her due date with her first child with fiancé Orlando Bloom is still a few months away, Katy Perry revealed her newest ultrasound photo has her convinced her daughter is already taking after her. How? It seems like her little girl, who's expected to arrive some time this summer, is also a fan of flipping the bird.

Back in March, the "I Kissed A Girl" singer revealed that she's pregnant with her first child when she released the music video for her song "Never Worn White." Since then, Perry announced that she is expecting a baby girl with Bloom and revealed that she thinks her daughter is going to be just like her. During a recent video interview with Ryan Seacrest and Kelly Ripa on Live With Kelly And Ryan, Perry opened up about her recent ultrasound and shared that her baby girl is already exhibiting a pretty feisty personality in vitro

"I had an ultrasound and she was moving around and I actually have a video of her giving me the middle finger," Perry told Ripa and Seacrest. But rather than worrying, Perry was gratified apparently. "I was like, 'This is my child.'"

Perry went on to explain that she was excited to be having a daughter because she had been "wondering who was going to inherit all of my absurd costumes." And if you're picturing a small baby giving people the finger wearing a onesie covered in Orlando Bloom's face as the singer wore for her interview, you're not alone.

The American Idol judge has been self-isolating at home with Bloom and his 7-year-old son Flynn, who the actor co-parents with ex-wife Miranda Kerr. And while the ongoing pandemic might be causing a disruption to her everyday life, Perry told The View that she's taking things "one day at a time."

"I have nothing to compare it to because it's my first, so obviously I'm just taking it one day at a time," she told The View. "I'm saying my prayers, I'm chanting, I'm looking for gratitude in every corner of my life." She certainly does seem to be looking for gratitude — and finding it in her daughter's sassy attitude in vitro.