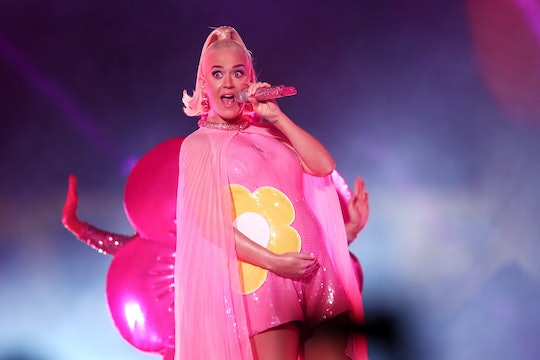 After powering through an impromptu splinter removal procedure during Sunday's episode of American Idol, Katy Perry realized that when she's in labor with her first child later this year, well, she's "gonna need anesthesia" to power through that, too.

Perry took a break from her official duties as an American Idol judge when she got a splinter in her left index finger. "I've got a splinter!" she said to her fellow judges Lionel Richie and Luke Bryan. Thankfully, the country star came to her rescue. "Let me do it," he said. "It'll take two seconds."

While an assistant disinfects a needle with a lighter, Perry gets progressively more terrified and saying, “Oh my God, what’s going on? You can’t even see it." But Bryan wasn't deterred. He continued removing the splinter through Perry's "ow's" and she was splinter-free in no time.

After it was all over, Perry realized that she might need a bit of pain management during labor because of her reaction. "I’m going to need anesthesia when I have kids," she said. "That was really, really small."

The anesthesia comment may have been made in jest, but Perry has been open about her hopes and expectations since announcing her pregnancy with fiancé Orlando Bloom on Thursday. After she revealed the big news in a music video for her new single "Never Worn White," she went on Instagram Live shortly to confirm the pregnancy and also revealed that she's due this summer.

And on Sunday, Perry revealed at the Women's Cricket World Cup final in Melbourne, Australia, where she performed a concert that she's hoping for a daughter. “I hope it’s a girl,” she said in the opening of her song "Wide Awake," a video of which was later shared on Twitter.

That "Fireworks" singer still has a few months to go until her summer baby arrives, but that leaves plenty of time for hilarious moments like the splinter removal and candid comments like her hopes for a girl.