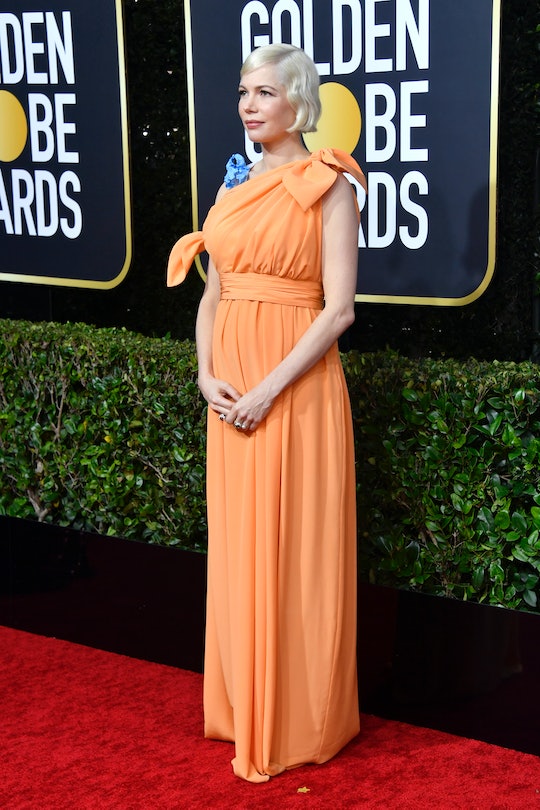 Michelle Williams has been one of America's sweethearts since she first walked into Capeside High, but seeing her on the Golden Globes Red Carpet really made everyone gush. People confirmed Williams' second pregnancy last week, but Michelle Williams debuted her baby bump at the 2020 Golden Globes and really sealed the deal. There's a new baby on the way, and I can only hope they turn out half as chic as their mother in this sweet orange gown.

Williams is already mother to a 14-year-old daughter, Matilda, whom she gave birth to while she was with the late Heath Ledger. Her new baby comes along with a new romance. According to People, Williams is engaged to Thomas Kail, the Tony-award winning director of Hamilton. This is their first child together.

Williams has been notoriously private in recent years, especially after the death of Ledger, and especially when it comes to Matilda. While her own career has kept her in the spotlight a good bit, Williams has made sure to keep her daughter out of it. I imagine she'll feel the same way about this new baby, and will try to keep their sweet face and life has private as she possibly can.

With parents like Kail and Williams though, this baby is bound to be incredibly special. Both Kail and Williams should be excited tonight as they head to the Golden Globes for Fosse/Verdon nominations (Kail directed the series), and I like to imagine their baby soaking up all those good, creative vibes. It's like a little magical baby, just along for the ride in a drop-dead gorgeous orange gown by Louis Vuitton. They have no idea what's actually happening out there — why they are floating in amniotic fluid or why they're being swiveled back and forth as their mother poses on a red carpet — but there's magic. I also hope this baby has a certain love of Fosse for no reason other than it brought their parents together. (And also because it's Fosse.)