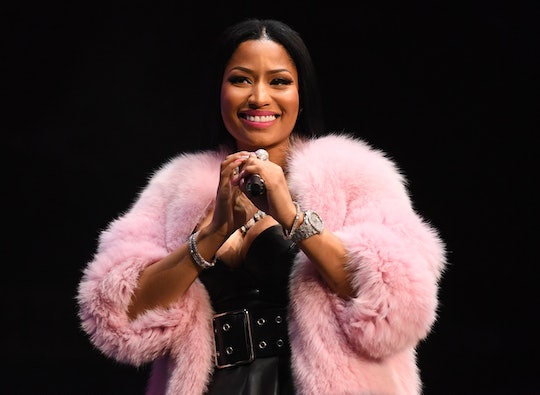 Not too long after announcing her exciting news that a baby's on the way, Nicki Minaj flaunted her growing pregnancy bump while rapping one of her new songs, "Move Ya Hips," in a video on Instagram.

In the video shared Thursday, the expectant mom dances and raps to her song featuring A$AP Ferg and MadeinTYO. Wearing a necklace that says "Queen," pink-rimmed sunglasses, and a sporty bikini, Minaj doesn't skip a beat while rapping a verse and casually touching her bump.

This is the first video Minaj has posted since she announced she is expecting her first child with her husband, Kenneth "Zoo" Petty. On July 20, Minaj posted a series of photos on Instagram that showed off her bump for the first time. "Love. Marriage. Baby carriage. Overflowing with excitement & gratitude. Thank you all for the well wishes," Minaj captioned one her announcement posts.

While she has been keeping relatively quiet about her pregnancy since her reveal earlier this month, Minaj did share a detail that could reveal how far along she is. In a new Instagram post on July 30, the rapper shared a photo of her from when she was in Trindad in February this year, writing in the caption that she was pregnant then. "While I was in Trinidad earlier this year, I had the worst morning sickness of all time. Didn't know morning sickness could last all day either. But nevertheless, this is one of the pics I took before you could see my lil' baby bump."

Beyond a few pregnancy tidbits, Minaj is also sharing brand new music with her fans, which may have come as a surprise to some. In September 2019, Minaj wrote in a now-deleted tweet that she "decided to retire and start a family," according to Billboard. But Minaj later clarified her words, telling The Shade Room that she was referring to her fifth album.

Needless to say, fans have been thrilled to get both a peek at her pregnancy and a taste of her music. "Ok, the cutest bump. Beautiful," one fan commented, while another said, "You look so beautiful! GLOWING!!!"