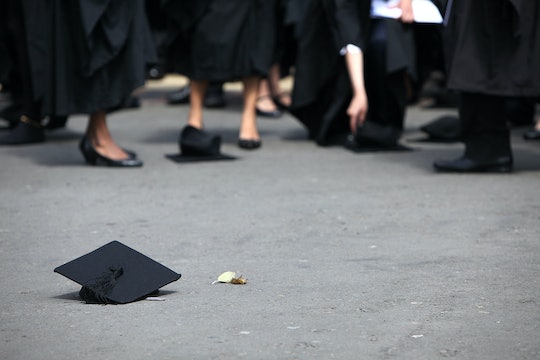 Spring should be an exciting time for high school seniors everywhere, prepping for graduation and whatever choices they've made about what awaits them next fall. But for one young Maryland woman, graduation season has been rife with controversy ever since the 18-year-old was banned from graduation for being pregnant back in January. Maddi Runkles has a 4.0 GPA, was president of the student council, and was reading over her college acceptance letter when she found out she was pregnant this winter.

The Heritage Academy, a Christian school that boasts "patriotism, knowledge, and Bible truth" on its seal, allegedly suspended Runkles for two days after learning she was pregnant. Officials also allegedly removed her from student council and told her that, although she would receive a diploma, she wouldn't be able to celebrate her many accomplishments by walking at the graduation ceremony with her peers next week. Romper's request for comment from Heritage Academy was not immediately returned.

In a statement on the school's homepage, principal David Hobbs wrote that he wants to be very clear about the fact that Runkles is not being "punished" for being pregnant, but for being "immoral." He added that the decision to bar her from graduation came about after "countless hours" of prayer and discussion.

Students at the academy reportedly take an oath to not engage in sexual activity until marriage, as well as to abstain from tobacco, alcohol, and drug use. For this reason, Runkles won't be able to walk in her graduation ceremony. Hobbs adds that while he and other administrators are pleased that she decided to "choose life" and not get an abortion, the "best way to love Maddi right now" is to not celebrate her choices at all, whether it be her "sexual immorality" or her choice to carry the fetus to term.

Amid appeals to the school to be allowed to walk in the ceremony, Runkles has also been an outspoken anti-abortion advocate. She made a deliberate, informed choice, and yet school administrators still made the decision they did, which has obviously caused some passionate debate.

Runkles is currently being represented by Students For Life, an anti-abortion group which believes that the teen should be celebrated for her decision.

Kristan Hawkins, the Students for Life president, told The New York Times, “She made the courageous decision to choose life, and she definitely should not be shamed. There has got to be a way to treat a young woman who becomes pregnant in a graceful and loving way.”

Runkles told The Times that she thought about keeping her pregnancy a secret and "fleetingly" considered abortion, but instead confided in her mother. Her father, Scott Runkles, a member of the Heritage Academy board, called a meeting with Hobbs to address the situation. After his daughter was initially suspended four months ago, he resigned from the board.

Luckily, Maddi has found support not just with Students for Life but also the Heritage Academy's athletic director, Jessica Klick, who herself has had two abortions she said she felt forced to have due to her strict religious upbringing, according to her New York Times interview.

According to the Guttmacher Institute, 62 percent of women who seek out abortions are "religiously affiliated." And teen pregnancy rates are down, according to the Centers for Disease Control and Prevention, likely due to expanded access to birth control. But young people like Runkles might also be less inclined to access contraception due to religious beliefs and stigma.

Theoretically, if she wanted to participate in school activities, Runkles would have been better off going against her religious beliefs and getting abortion. She was faced with an impossible choice either way, according to her beliefs.

Maddi's situation makes a strong case for responsible, science-based sexual education in schools. Women everywhere should be informed about their choices and not shamed for making one, whatever they decide.