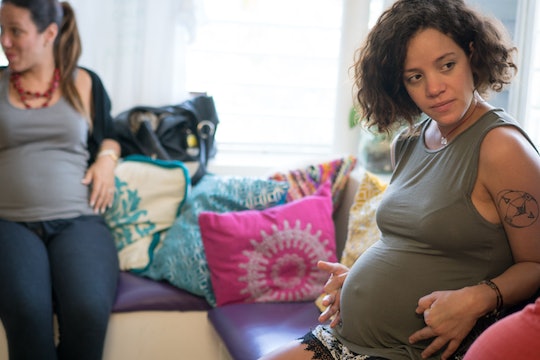 Pregnant Women Aren't Included In Zika Vaccine Trials, But Maybe They Should Be

The Zika epidemic has slowed dramatically from a year ago, which is good news for expectant mothers hoping to shield their infants from the severe health issues associated with exposure to the virus. Still, researchers are moving quickly to develop an effective Zika vaccine in order to protect those most at risk from a potential resurgence of the virus. But even though world health officials have identified pregnant women and their fetuses as a primary population for protection, pregnant women aren’t in the Zika vaccine trials, The Scientist reported. And this factor could complicate matters as researchers race toward a viable vaccine.

The virus hit epidemic levels by this time last summer, with thousands of people contracting Zika in Central and South America. As world health officials strongly suspected a link between Zika infection and a dramatic rise in microcephaly — as well as other developmental disorders in babies born to women who had contracted the mosquito-borne virus — experts sought government funding to speed vaccine research and prevention.

Johns Hopkins University bioethicist Ruth Faden told The Scientist that researchers moved with “unprecedented speed” to create a vaccine, and there are now close to 40 vaccines currently in various stages of development, including several that have advanced to human trials.

But even though it's well understood that any successful vaccine would have to be capable of protecting a fetus, none of the vaccine candidates have been tested in pregnancy, The Scientist reported.

Last year, experts believed that it could take as long as two years to develop an effective vaccine, and that human trials — an early stage of the development process — could face challenges if the number of people infected with the virus began to taper off. Now, vaccine developers are dealing with an added dilemma of when to begin including pregnant women in their research.

Of course, any study should seek to minimize the risk of endangering babies while in utero, but that's not the issue causing researchers concern. Anthony Fauci, director of the National Institute of Allergy and Infectious Diseases, told The Scientist earlier this summer that the bigger problem is getting to women before they become pregnant: “One of the issues with [vaccinating] pregnant women is that the horse is out of the barn,” Fauci said.

In other words, a pregnant woman living in a high-risk area has a greater chance of being exposed to the virus before entering the study population. Faucet said that the safest, most effective option would be to test vaccines on women of childbearing age before they ever become pregnant.

Others argue that is not only unrealistic, but it would leave pregnant women unprotected. Faden and her colleagues have issued guidance for including pregnant women in Zika research and called for continuous data collection on vaccine efficacy and safety during pregnancy (as women in the studies become pregnant), according to The Scientist. The authors wrote that, when it comes to Zika, being overly cautious would actually do a disservice to those most at risk of harm:

Historically, the needs of pregnant women have not been adequately represented in the development of biomedical interventions, including vaccines. New products are rarely designed with the specific needs of pregnant women in mind, and for many interventions evidence about safety and efficacy in pregnancy is limited and late in coming. [...] Pregnant women have the deepest interest in the health of their babies, and will suffer along with their children if [congenital Zika syndrome] is not averted.

Typically, evidence about the efficacy of a drug or vaccine on pregnant patients is only gathered after the drug has been released, The Atlantic reported. Still, though researchers are hesitant to expose pregnant women to new vaccines. But there is precedent: Development of the flu vaccine included clinical trials on pregnant women, according to the Centers for Disease Control, as did development of the vaccine for respiratory syncytial virus (RSV).

But the development of the Zika vaccine isn’t like others. This time, not only are expectant mothers and developing fetuses more likely to have serious complications from the virus, the Zika infection affects pregnant women differently, in terms of transmission and infection rates. For all those reasons, when it comes to Zika, researchers have to be concerned about giving pregnant women fair — even prioritized — access to breakthrough vaccine research, Faden and her colleagues wrote in their guidance to the field.

The Zika virus is no longer dominating news headlines, but it remains a real threat for millions of women and infants around the world. Researchers may be hesitant to place an expectant mother or her fetus in danger, but the nature of the virus means that they may face an even bigger danger if a working vaccine is slow to arrive. Allowing those at greatest risk to have the first chance to benefit from protection may be the right thing to do, however frightening.