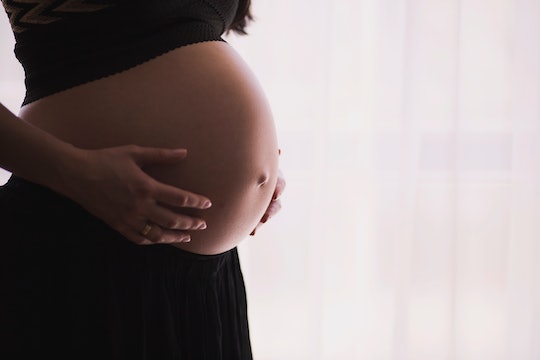 Pregnant Women Are Treated Unfairly In The Workplace & Yes, It's 2016

Being pregnant is a pretty tough gig. You're trying to grow a whole other person, you're tired, your feet hurt, and you're a little scared about the big changes you know are coming. While having a baby is a beautiful time for most women, it's also one of the most anxiety-inducing periods in their lives. Unfortunately for pregnant women in the workplace, pregnancy stress doesn't seem to end there. According to some recent information from Citizens Advice, pregnant women are treated unfairly in the workplace in a major way these days.

The Citizens Advice report, which was released on Monday, showed a 25 percent increase in people seeking advice on pregnancy and maternity discrimination in the last year. The British charity organization, which provides advice to millions of anonymous clients every year on issues from debt and housing concerns to discrimination in the workplace, reported that over 2,000 women sought maternity and pregnancy discrimination advice between April 2015 to March 2016.

Citizens Advice also reported 22,000 visits to their web page from those searching for information on maternity discrimination in the same period. Some of the complaints were from pregnant or new mothers who had found their hours at work slashed, pushed into zero-hour contracts, pressured into returning to work early from maternity leave and sometimes even forced out of their jobs entirely.

Obviously, it is against the law for any employer to discriminate against a woman because she is pregnant. As Citizens Advice Chief Executive Gillian Guy said in a statement this week,

Pregnant women should be supported at work, not made to fear for their livelihood. It is concerning that more and more new and expectant mums are experiencing discrimination issues at work. People with a baby on the way will have a lot on their minds already. The last thing they need is a threat to their income or job security. All employers should respect and uphold the rights of staff who are new parents or expecting a baby.

Yet the Equality and Human Rights Commission reported in March that about three-quarters of women have experienced some form of negative experience in direct correlation to their pregnancy at work. Women were still losing their jobs because they were pregnant — in one instance, Citizens Advice reported that a pregnant woman had her hours cut in half with her boss explaining there simply wasn't enough work, despite having recently taken on new staff.

So what should you do if you think you're being discriminated against in the workplace, or if you see discrimination happening to someone else? Well, there are a few steps you could take.

Women in the workplace already face a litany of obstacles, from pay disparity to sexism. Removing that burden of pregnancy-related woes would simply help lighten their load — and that's something everyone can get behind.