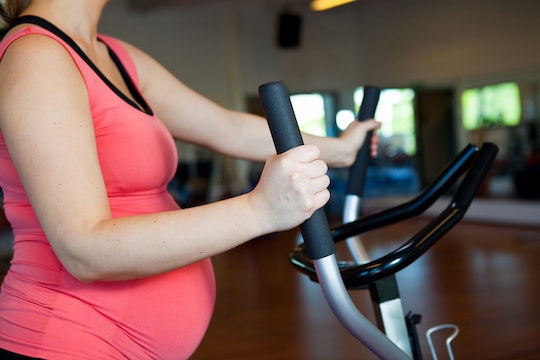 Maintaining an exercise regime while pregnant is perfectly safe for many women, as long as it is cleared by a doctor. However according to new research, pregnant women can reduce "bump bounce" by wearing specialized maternity workout gear during high-impact activities. What is specialized maternity gear, you ask? Basically, it's leggings with a supportive mid-section. Even more basically, it's a sports bra for your bump.

As reported by the Daily Mail, the study, conducted by the University of Portsmouth in England, has yet to be peer-reviewed or published in a journal. However, the results still speak for themselves. Researchers studied four pregnant women, each of whom were four to five months pregnant, and an average of 32 years of age. When observing the women in regular workout clothing (which was an H&M tank top and Blooming Marvellous leggings), the average bump movement was 6.2 centimeters. However, once the women put on the special maternity exercise gear (which came from FittaMamma), the average bump movement was 3.8 centimeters.

"Our tests on FittaMamma specialist maternity fitness wear reduced bounce of the bump in all directions by 48 per cent," Sophie Rej, who conducted the tests for the study, said in a statement shared with the Portsmouth, England's The News. "This suggests this clothing might help women overcome common barriers to exercise, such as pregnancy-related pain."

So how on earth did the researchers measure "bump bounce"? As it turns out, they have a lot of experience in that area. The study was carried out by a team of biomechanic researchers who have years of experience testing "breast bounce" in bras for both the military and bra companies, as the Daily Mail reported.

The team was led by Professor Joanna Wakefield Scurr, a professor in biomechanics at the University of Portsmouth. According to her bio on the university's website, she is the head of the international Research Group in Breast Health, which is known for its research on "the biomechanics of the breast and bras." So even though a bump is not the same as a breast, it would seem that similar research methods can be used to study both.

"Even though it was a small scale study, the findings are compelling and statistically significant," Wakefield Scurr said, as reported by the Daily Mail. More research still needs to be done, but for now, the creators of FittaMamma, Deborah Hazeldean and Alexandra McCabe are thrilled that there is now scientific research (though unpublished) that their maternity workout gear could help women stay active while pregnant.

McCabe said in a statement shared with The News that the research "fully vindicates what we believed, and we are hoping this will empower more women to keep exercising through their pregnancies" and that the company's "aim is to remove the barriers to pregnancy fitness so women can continue to exercise with confidence and support."

Though there haven't been many studies on pregnancy workout gear, there have been plenty of studies about the benefits of working out while pregnant. A recent study by the Technical University of Madrid found that consistent exercise during pregnancy contributed to shorter labor and a lesser chance of needing an epidural. Additionally, the American College of Gynecologists and Obstetricians advocates for maintaining exercise during a healthy pregnancy, as long as it's cleared by a doctor.

"Physical activity in pregnancy has minimal risks and has been shown to benefit most women, although some modification to exercise routines may be necessary because of normal anatomic and physiologic changes and fetal requirements," the ACOG explains on its website. "Women with uncomplicated pregnancies should be encouraged to engage in aerobic and strength-conditioning exercises before, during, and after pregnancy.

FittaMamma's maternity leggings start at £39.99 (about $51 USD), and the company also offers maternity and nursing sports bras, which start at £24.95 (about $32 USD). Happy bumping!