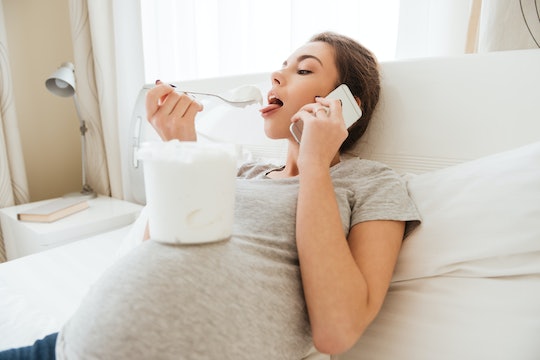 Pregnant Women Crave Some Unusual Food Combos, According To This New Study

There have been jokes about pregnant women craving weird foods nearly as long, I suspect, as there have been pregnant women. In fact, if you think about some of the first questions people ask you after you announce your pregnancy, they're usually food-related. Because I can tell you as a graduate of four pregnancies, you tend to become laser-focused on your food needs when you're growing a person. And sometimes you're going to want some of pretty unusual food combinations as a pregnant woman and you're not alone, as a new study has found. So don't feel bad if you want to, say, eat trays of ice cubes like this girl did right here.

The recent study — conducted by Pregnacare, as reported by The Independent — looked at 1,400 pregnant women and the types of food they tend to crave and found that wanting to eat weird food combinations is totally normal. But the majority of pregnancy cravings weren't totally out there; more than half of pregnant women polled —  67 percent — seemed to crave the same things most women crave, like chocolate, fruit, and Popsicles, the study noted as some of the most common cravings.

While many women tend to try eating healthfully during their pregnancy — focusing on high-fiber fruits, vegetables, and lean proteins — unfortunately cravings are not always your friends when it comes to helping you make good food choices.

Nutritionist Yvonne Bishop-Weston told The Independent that pregnant women in the modern world tend to reach for processed, sugary foods when they're dealing with some seriously unstoppable cravings simply because we have so many options at our fingertips. "The desire for high sugar and processed junk foods, unfortunately, seems to be increasing. In days gone by there was less fast junk food around to lure us in," she explained, according to The Independent. "It wasn’t easy to access and it wasn’t as ordinary and socially acceptable as it can be now."

But it's not just higher fat, processed foods women crave; the study found some seriously strange combinations of foods. According to The Sun, expectant moms craved things like:

Some moms craved dry chocolate powder, while one vegetarian even admitted that she suddenly developed a hankering for some good old bacon. And I'm not talking about Kevin Bacon either.

So why do we crave the things that we do while we're pregnant? Bishop-Weston told The Independent that women could crave foods that remind them of a time in their childhood when they felt most cared for. But there's also the possibility that pregnant women suffer from low energy and might be looking for "quick fixes" for a boost.

Of course, a new batch of fluctuating hormones can also cause cravings, as Babble noted, and "carbohydrates and foods containing tryptophan could give a boost to the mood-regulating neurochemical serotonin."

In the past, there has been some debate among health professionals that inexplicable pregnancy cravings could be triggered by a nutrient deficiency in the mother. This could explain some non-food cravings, like pregnant women who crave dirt or chalk, which some doctors have attributed to a possible iron deficiency.

As for those rather weird food combos you may be craving? It just comes with pregnancy. "Craving unusual foods is part of being pregnant for many women, but most are not harmful," spokesman for the study told The Sun.

Let's face it; everyone craves something during pregnancy. As long as it's not hurting you or your baby, everything in moderation, right? I mean, carrots dipped in ketchup sounds like just about the worst thing possible, but to each their own. You're growing a baby, girl; live a little.

More Like This
What Foods Fight Nausea During Pregnancy?
Does The FDA's Plan To Limit Lead In Baby Food Go Far Enough?
Meghan Trainor Shares Baby News After Dropping Hints On TikTok
Mom Gives Birth To Record-Breaking 16-Pound Baby
What Parents Are Talking About — Delivered Straight To Your Inbox