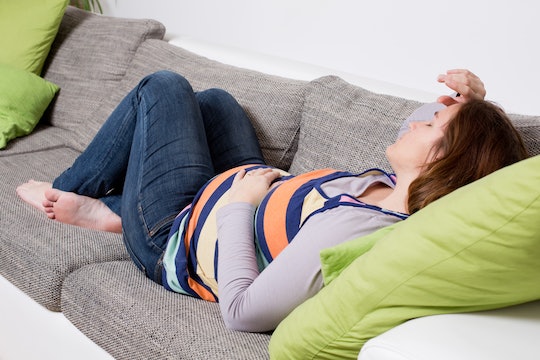 Let's get real for a hot minute: Most moms just don't get enough sleep. Between wrangling kids to get out the door in the morning to getting through the busyness of the day to staring at their iPhones once it's finally time for bed, sleep is an elusive bedfellow for lots of moms — myself included. And, as science likes to point out on the regular, not getting enough sleep is associated with poor health outcomes. New research shows that a lack of sleep for moms-to-be could also prove problematic in ways that could harm both moms and their developing babies, too: Pregnant women who don't get enough sleep are at a higher risk for gestational diabetes.

The study out of the University of Illinois at Chicago College of Medicine was published in Sleep Medicine Reviews earlier in October, and was the first large-scale meta analysis of its kind. Researchers reviewed eight studies that examined the sleep duration and prevalence of gestational diabetes in pregnant women. Across the eight students, the total meta research sample included more than 17,000 pregnant women — and the conclusions were in alignment with similar findings between sleep duration and rates of diabetes occurring outside of pregnancy.

Ask any woman who is or has been pregnant, and she'll tell you that sleep is like your best frenemy: When I was pregnant, I remember distinctly flipping between states of near zombie-like stupor from exhaustion during the day, but then staring at my ceiling wide-eyed at 2 a.m. near tears just wishing I could sleep for more than 20 minutes at a time. In this research on sleep duration and gestational diabetes, researchers found that the magic number was around 6 hours of sleep per night. Researchers found that pregnant women who slept less than 6 hours had a 1.7-fold increase in developing gestational diabetes.

The researchers were quick to point out that correlation does not equal causation: If you're pregnant and you're regularly pulling in less than six hours of sleep at night, you're at a greater risk — but not a guarantee — for developing gestational diabetes. There are plenty of other risk factors that go into whether a pregnant woman will develop gestational diabetes.

It's also important to note that gestational diabetes often doesn't show any symptoms — and the only way to know if you have it is to get tested. If you already have one or more risk factors for developing gestational diabetes and you're having troubling pulling in more than six hours of sleep at night, it might be worth having a conversation with your health care provider. Gestational diabetes does two things: it puts pregnant women at risk for preterm births, and it also increases the chance of a baby growing in excess of 9 pounds (despite the preterm risk) — which then can put both mother and baby at risk for complications during delivery.

In many ways, the finding from this latest study on sleep duration and gestational diabetes feels like a one-two punch, and the researchers noted that pregnancy itself can cause poor sleep. From trying to find a comfortable sleeping position with a growing belly or round-the-clock nausea, to hormonal changes that fluctuate with each trimester or even those latent anxious thoughts that can keep parents-to-be up late at night, there's a lot going on at once that can make getting adequate sleep such a challenge for some pregnant women.

The researchers concluded that more direct study needs to be done on the prevalence of gestational diabetes among sleep-deprived pregnant women, as well as whether or not getting more sleep could actually help alleviate the severity of gestational diabetes for women who do have it. Until then, the best sleepy pregnant women can do is try and find the most comfortable position to sleep, maybe have a little Netflix and self-chill, and get whatever shuteye they can before their sleep takes another nosedive once baby arrives.