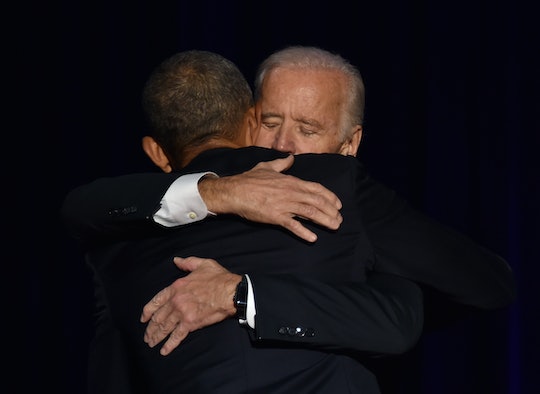 As the clock winds down on the Obama/Biden era, it's hard not to be emotional. Not only have President Obama and Vice President Biden managed to do great work during their time in office together, both men have also wormed their way into our hearts. So naturally, when President Obama gave Biden the Presidential Medal of Freedom, it made everyone break down. Because we're all feeling rickety as it is, and some things are simply. Too. Much.

The Presidential Medal of Freedom is the highest honor the president can bestow on a civilian. And President Obama chose not only to award his "brother", Vice President Biden with the medal... but he surprised him with it. Before he announced his intention, Obama gave a moving, thoughtful speech about his longtime friend and colleague, saying:

You see Joe’s heart in the way he consoles families. To know Joe Biden is to know love without pretense, service without self regard and to live life fully. As one of his longtime colleagues in the Senate said — who happened to be a Republican — if you can’t admire Joe Biden, you have a problem.

Which had a surprised Biden (and the rest of the feeling humans watching) turning away from the room full of reporters to break down in tears.

The Presidential Medal of Freedom, according to the White House, is "presented to individuals who have made especially meritorious contributions to the security or national interests of the United States, to world peace, or to cultural or other significant public or private endeavors."

The friendship between Obama and Biden has become the stuff of legends, a meme-worthy bromance we all love to tweet about. Except for this moment, this lovely surprise we all got to share a little piece of... we remember their friendship is a real, true thing. That these men have been working side by side for eight years, that they respect each other, that they help each other. When an emotional Biden accepted the Presidential Medal of Freedom, he talked about his son, former Attorney General Beau Biden, and the help Obama offered Biden's family as his son grew sicker all the time (Beau Biden lost his battle with cancer in 2015). He worried his son would have to leave his job, and the family would have to sell their home to help him. Obama told him that, no matter what, he would be there to help him. Even give him the money to keep his home.

Biden also admitted he had "no inkling" the honor would be bestowed on him, saying:

This honor is not only well beyond what I deserve , but it’s a reflection of the extent and generosity of your spirit. I don’t deserve this, but I know it came from the President’s heart.

He also talked of their famed friendship:

As we get ready to say goodbye to Biden and Obama, at least we can comfort ourselves in the memory of this perfect, humbling, emotional surprise. For a brief moment, it felt like we were all part of their bromance. And it felt pretty damn great.