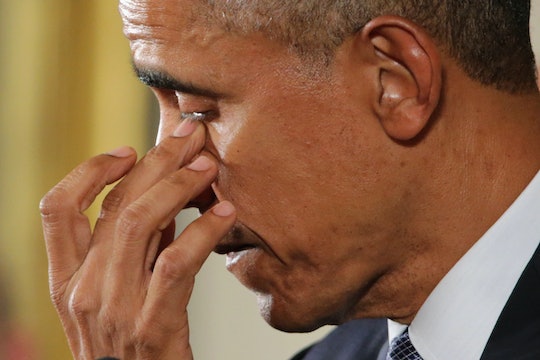 President Obama Teared Up During His Gun Violence Address For This Important, Tragic Reason

In a White House speech attended by many of the survivors and relatives of those killed in the nation’s brutal history of mass shootings, President Barack Obama outlined the long-awaited details of his proposal to curb gun violence in the U.S. The proposal deploys a slate of executive actions, rather than recommendations to Congress, to tighten regulations on gun sales, strengthen background check reporting, crack down on illegal trafficking, and encourage greater access to mental health services. But after delving into his four-part approach to addressing gun violence, things got a bit emotional in Obama’s speech. At a crucial moment, President Obama teared up during his gun violence address — and he had a really good reason.

Obama’s remarks outlined the major provisions from a series of executive actions he is expected to sign this week. Obama’s plan includes tightening regulations around gun sales and increasing the effectiveness of the nation’s firearms tracking systems, according to the New York Times. But rather than introducing new policy or large-scale legislation, the proposal essentially clarifies existing federal laws, CNN reported.

The President’s plan follows a rising tide of public support for expanding background checks on firearms sales, according to poll analysis by Real Clear Politics.

However, the plan is the outcome of a personal commitment by the president to take action to curb gun violence, according to proposal details posted on WhiteHouse.gov, borne out of his frustration with congressional inaction in the wake of mass shootings over the course of his two terms. That anger and exhaustion came through in his remarks when the President named the many shootings that have happened during his time in the Oval Office, according to a live feed of the event:

Five years ago this week, a sitting member of Congress and 18 others were shot at at a supermarket in Tucson, Arizona. It wasn't the first time I had to talk to the nation in response to a mass shooting and it wouldn't be the last. Fort Hood, Binghamton, Aurora, Oak Creek, Newtown, the Navy Yard, Santa Barbara, Charleston, San Bernardino — too many.

The President’s grief over the thousands of victims lost — and his frustration at gun rights’ activists' staunch opposition to firearm regulation — were almost tangible in his words, but especially during an incredible, crucial moment in his speech. Speaking about the need to balance the constitutional right to bear arms against others’ basic rights, Obama’s voice began to break and tears streamed from his eyes:

Second Amendment rights are important, but there are other rights that we care about as well. And we have to be able to balance them. Because our right to worship freely and safely, that right was denied to Christians in Charleston, South Carolina. And that was denied Jews in Kansas City. And that was denied Muslims in Chapel Hill, and Sikhs in Oak Creek.

They had rights, too. Our right to peaceful assembly, that right was robbed from moviegoers in Aurora and Lafayette. Our unalienable right to life, and liberty and the pursuit of happiness, those rights were stripped from college kids in Blacksburg and Santa Barbara, and from high schoolers in Columbine, and from first graders in Newtown. First graders. And from every family who never imagined that their loved one would be taken from their lives by a bullet from a gun. Every time I think about those kids, it gets me mad.

As this video from CBS News shows, Obama paused and wiped away tears while remembering the people killed at Sandy Hook Elementary School in Newtown, Connecticut, in 2012. And he had a good reason to cry: Out of the 26 people killed when a gunman opened fire in the school, 20 were just 6 or 7 years old.

Gun violence has real, human consequences. Obama emphasized that sometimes we give up certain freedoms to protect other people's freedoms in some way. And, in this case, not many rights are being given up by gun rights' activists in exchange for the lives that could be saved.

So far, the President’s gun control proposal has been met by an immediate promise by Republicans to challenge the provisions in court or undo the proposals, should the GOP gain control of the White House in 2016. On the other hand, Democrats are applauding the plan as a first step toward addressing gun violence, CNN reported. CNN also reported that Obama will listen to concerns from both sides at a town hall on Thursday, January 7 — just days ahead of his final State of The Union address on January 17.

Obama's actions on gun control are seen as necessary by the families who have felt the impact of gun violence, and that's what his tears made clear during his address.