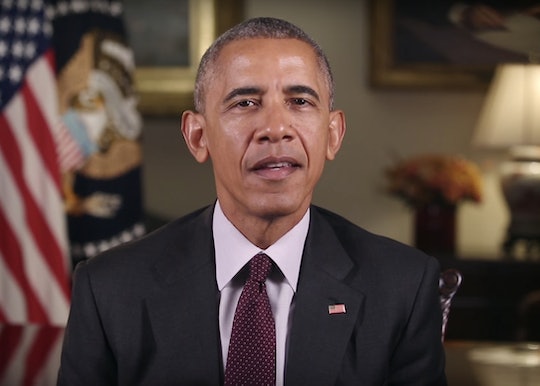 The president's call for unity was far more subtle and uplifting than Trump's: The president actually cracked a smile at the beginning of his Thanksgiving address as opposed to Trump's dour grimace throughout his. Obama focused on our history of unity, shared values, and allegiances. Like Trump, Obama recognized that the federal Thanksgiving holiday as we know it was originally proclaimed by President Abraham Lincoln. While Trump spoke in broad strokes about Lincoln's call to unity at the time, Obama made no hesitation about acknowledging why the historical context of Lincoln's Thanksgiving proclamation was so important: It was 1863, and the country was in the throes of a deadly and devastating civil war.

That's why, through the fog of Civil War, President Lincoln saw what mattered most - the unalienable truths for which so many gave their lives, and which made possible "a new birth of freedom." And so precisely when the fate of the Union hung in the balance, he boldly proclaimed a day of Thanksgiving, when the nation's gifts "should be solemnly, reverently, and gratefully acknowledged, as with one heart and one voice by the whole American people."

President Obama's Thanksgiving address was the complete opposite: Gleaming turkey made with Grandma Obama's recipe passed down through the generations, Michelle's killer green bean casserole — and you know she puts extra fried onions on top — and more homemade pies than you can count.

In all seriousness: Obama's Thanksgiving message focused on our shared American legacy and how it shapes our country today — as so many of his past holiday messages and addresses have over the past eight years:

Never doubt, that is what makes us American - not where we come from, what we look like, or what faith we practice, but the ideals to which we pledge our allegiance. It's about our capacity to live up to the creed as old as our founding: "E Pluribus Unum" - that out of many, we are one... Our best days will always be ahead. And we will keep building a future where all of our children know the promise of America.

It's obvious that Trump has some pretty big presidential shoes to fill once he takes the oath of office — but it's even more apparent when you compare Trump and Obama side by side on something as simple as a Thanksgiving address to the nation. You can read Obama's full Thanksgiving address at The White House website.