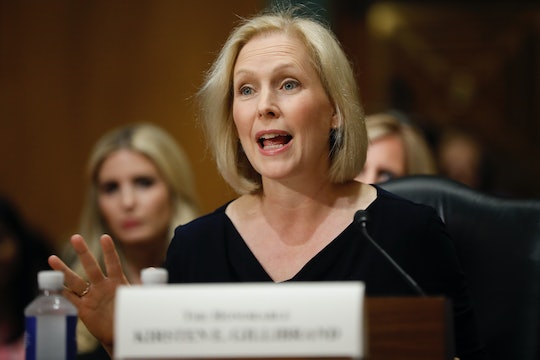 Presidential Candidate Kirsten Gillibrand's Campaign Platform Is For Your Kids

Being a mother is no small thing. In fact, in my experience as a mom it can sometimes feel like the guiding light. That one thing about you that wins against everything else. No matter what you're doing or where you go, the first thing you think of when it comes to decision-making is your children. I'm oversimplifying here, I know, but I think there's a core of truth in this; perhaps it's time for a mother to run this country. A mother like Kirsten Gillibrand. Presidential candidate Kirsten Gillibrand promises to fight for your children's future as the major part of her platform. She'll fight for your children, she says, the same way she'll fight for her own. And this promise means more to me than all the walls in all the world.

The Democratic senator from New York officially announced her plan to throw her hat in the 2020 presidential race during an interview with Stephen Colbert on The Late Show With Stephen Colbert on Tuesday. During her interview, Gillibrand made it clear that she planned to speak as a mother as well as a politician during her campaign, "You have to bring Democrats and Republicans to the table on the shared values of this country. We all love our children."

As a mother myself, I love this. As a woman, I love this. I love that Gillibrand isn't shying away from all of the facets of her life that make her who she is, something that's been a struggle for women in power in the past. We all remember how former presidential candidate Hillary Clinton, who wrote the foreword for Gillibrand's 2015 memoir Off The Sidelines, struggled to be considered "likable" during her campaign while also being held to a very different standard than President Trump. If Clinton was vulnerable, she was accused of "playing the woman card" by Trump. If she was tough, she was unlikable. A "nasty woman" as we all remember Trump calling her during a debate.

While it's lovely to see a female candidate embracing her own right to be a woman and a mother, it's important to remember that focusing on the next generation is not simply an issue for women. Fathers love their children too. They presumably want to see someone leading this country who will ensure they have clean water, education, health care, and a booming economy as they grow up. And Gillibrand has some solid years in politics behind her to prove she could have the staying power that's needed in this position. During her seven years in the senate she was instrumental in having the "Don't Ask, Don't Tell" policy repealed, co-sponsored the Campus Accountability and Safety Act in 2015, and has been uncompromising in her stance on sexual assault in the military.

In other words, she has the experience to back her up and the fortitude to get the job done.

Maybe because she's a mom.

It's still early days yet, and time will tell how Kirsten Gillibrand fares as a presidential candidate. But I think if she can keep her core campaign promise focused on fighting for children, she should do well.