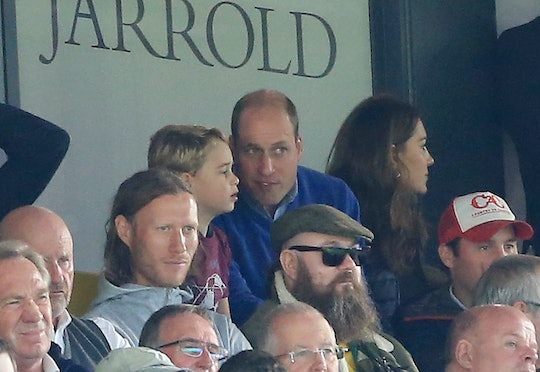 Prince George Getting Excited At A Soccer Game Is Too Adorable

These days everyone is just wild for Princess Charlotte including me. The 4-year-old daughter of the Duke and Duchess of Cambridge is seriously adorable and just a little bit sassy, so every time she bats an eyelid or (more likely) sticks out her tongue it's all royal fans can talk about. But I'm here to plead a case for the quieter, more introspective royal kid. Princess Charlotte's older brother, 6-year-old Prince George. He's becoming such a little kid, you know? For instance, check out Prince George getting stoked at a soccer game with his parents. He is just a naturally lovely kid, and I think he needs a moment of his own.

Almost the entire Cambridge clan was on hand to cheer on Prince William's favorite soccer (or football) team, Aston Villa, play against Norwich City on Saturday. The only member missing was 1-year-old Prince Louis, perhaps because his parents are well aware that any kind of sit-down event where adults want to watch things are way less fun with a baby. Besides, it looked to be a nice little outing for the older two children to enjoy with their parents. One of them slightly more than the other, by the looks of things. Prince George was captured on video by broadcast television cheering like a true little soccer fan when Aston Villa scored a goal. Also not to be that person but Prince William looked quietly proud to see his son cheer for his favorite team, I'm sorry it was adorable.

Prince William has long been a seriously avid fan of soccer, acting as the president of the Football Association in the United Kingdom since 2006. And it looks like little Prince George is going to follow in his father's footsteps. When it came time for the oldest Cambridge child to turn six in July, his parents reportedly threw him a birthday party with his pals from Thomas's Battersea School at Kensington Palace. The theme? Soccer or football, depending on which side of the pond you happen to be on, as reported by Hello! magazine. Which makes sense considering Prince George's official birthday portrait from 2019 showed him sporting a big grin and am England national football team jersey.

Prince George has come a long way with his soccer adoration over the past few years. Back in 2017, his father met with members of England's women's soccer team and opened up to some players about how much he wanted both of his kids to get into the sport, as player Casey Stoney told People:

He said at the moment he’s trying to teach George that football is actually a contact sport. But George doesn’t really like it when he’s palming him off and getting physical.

Both Prince William and Kate Middleton have reputations as being very sporty people, so it would make sense for their kids to get involved as well.

And if you're worried they're forcing their own hobbies on Prince George please scroll back up and look at the joy on his face.

He's having a real moment.