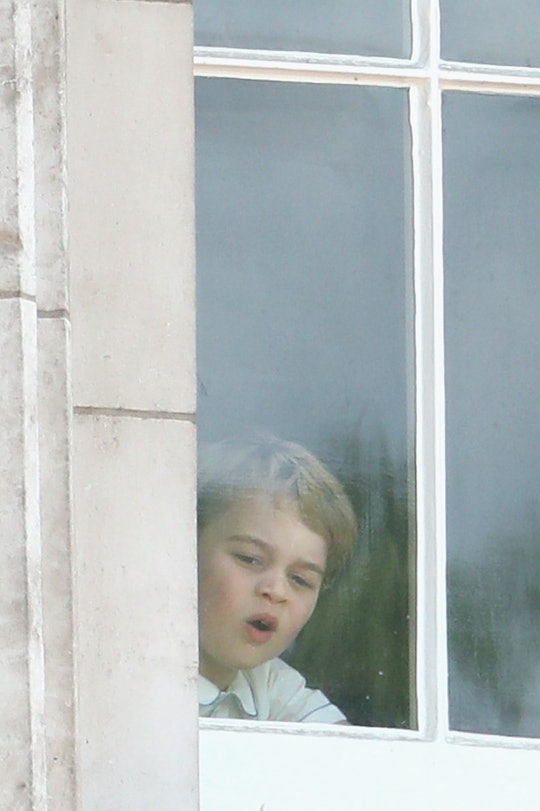 Kate Middleton Was All Of Us When She Heard Prince George Ate... An Ant

No matter how lofty a title you might give them, kids are, well, going to be kids. And the future king of England proved just that recently with an oh-so-childhood moment during a charity sailing event with his family. For the record, his parents, the Duke and Duchess of Cambridge, took everything in stride. In fact, Prince George had Kate Middleton laughing after he was caught eating something quite surprising.

The sweet and funny moment took place at the King’s Cup charity sailing regatta on the coast of the Isle of Wight, according to The Mirror. Adventurer Bear Grylls won the event and made the revelation when he stepped up to the podium to claim his trophy. “And also Prince George, your first ant you ate today. And that is a great moment. Well done you,” he cheered, as The Sun reported.

Of course, Grylls would have the inside line on any natural delicacies being consumed; he’s known for eating everything from raw snake to moose heart during his television shows Man vs. Wild and Born Survivor, according to HuffPost. Prince William and Middleton seemed to take the hilarious revelation in stride, apparently laughing as they stood to the side of the stage, as The Mirror reported.

Something must have been in the seaside air that day because Princess Charlotte also had a cheeky moment that left her mom in stitches. As The Sun reported, Middleton was encouraging the little princess to wave to crowds, but 4-year-old Charlotte decided on something else — sticking out her tongue. In video from the day, Middleton can be seen laughing along with the crowd but also turned her sassy daughter away and began to direct her off the stage.

The Cambridge kids spent the day with their grandparents Carole and Michael Middleton as both Prince William and Middleton crewed boats in the regatta, according to Town & Country. The Duchess of Cambridge was given a giant wooden spoon for coming in last in the event, while Prince William earned a bottle of champagne for his third place finish.

Before the sailing — and Prince George's ant-eating, of course — got under way, the family spent some time together on the beach, enjoying a children’s entertainer named Pirate Pete, according to The Daily Express, who told the publication that Prince George and Princess Charlotte "were trying to steal my weapons, my sword, and there were some good pirate faces being pulled... They're just the same as any other kids. They want to have fun."

The latest news about Prince George seems to fall right in line with his parents' plan to let him, and his siblings, be a kid as long as they possibly can. In fact, Prince William told the BBC in 2016 that, for the moment, he's eldest is not totally aware of his royal responsibilities in the future. "There'll be a time and a place to bring George up and understand how he fits in, in the world," Prince William said at the time, according to The Sun. "But right now it's just a case of keeping a secure, stable environment around him and showing as much love as I can as a father."

It sounds like a good plan, to let the future king develop in these early years as normally as possible. And from the sounds of it, it seems that Prince George is doing his part perfectly — yummy ants and all.