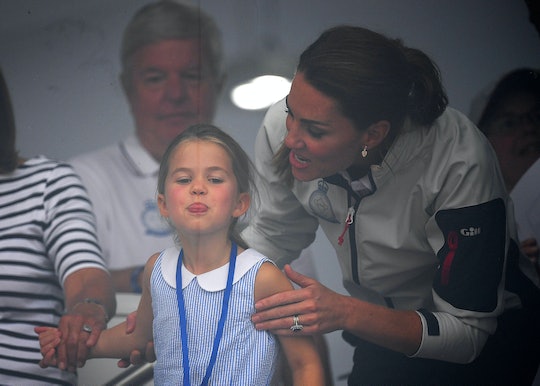 There's More Evidence That, Yes, Princess Charlotte Is The Queen Of Sass

Princess Charlotte is the queen of sass, and nothing you say can tell me otherwise. However, if you need proof, I've got some. On Thursday, Aug. 8, Princess Charlotte and Prince George were spotted supporting their parents Kate Middleton and Prince William as they took part in the inaugural King's Cup Regatta, a charitable sailing competition created to raise funds and awareness to eight charities supported by the couple. Naturally, all eyes were on the Duke and Duchess of Cambridge, but Princess Charlotte stuck her tongue out at the crowd, and suddenly, it was the cheeky 4-year-old who stole the show. Seriously, it's about time I recognized this is Princess Charlotte's adorable world, and I'm just living in it.

While television personality, Bear Grylls, won the overall competition, Prince William received third place and Middleton came in last after being disqualified in the second race, according to Entertainment Tonight. However, placing means nothing when you're being compared to Princess Charlotte, and they would all soon be overshadowed by the sassy queen herself.

In a video published by Hello! Magazine, Princess Charlotte is seen at The Royal Yacht Squadron in Cowes, Isle of Wight, with her mother and older brother. When pair notice the large crowd gathered below, Middleton points through the glass and seemingly suggests that Princess Charlotte wave. But things take a turn, and instead of waving, Princess Charlotte sticks out her tongue. The onlookers — and the Duchess of Cambridge — immediately burst into cheers and laughter, and Princess Charlotte turns away shyly with her mom trailing behind.

Now, Princess Charlotte's stunt at the King's Cup regatta wasn't the first time she has been caught with her tongue out in front of the cameras. Previously, the playful princess was seen sticking out her tongue at Buckingham Palace during the Royal Air Force's 100th Anniversary, according to ELLE. Princess Charlotte was photographed alongside Prince George and Prince Louis, who stuck with waves and smiles. But, of course, the princess moved crowds with her signature move.

Nonetheless, fans of the royal family will never forget when Princess Charlotte reached peak cuteness at the royal wedding of Prince Harry and Meghan Markle. As the mischievous princess arrived at the wedding to perform her bridesmaids duties in St. George's Chapel, she stuck her tongue out to the paparazzi from inside the car, and everyone went wild.

Following the now-famous photograph from the royal wedding, many joked Princess Charlotte's naughty actions were hereditary. When he was a child, Prince Harry was pictured making the exact same face as his niece. Most notably, he was seen sticking out his tongue when he arrived at school with his mother, Princess Diana, back in 1988.

The Duke and Duchess of Cambridge may not have reined in first place at the King's Cup charity event, but Princess Charlotte's precious actions won over the hearts of the public throughout the world. So basically, that's enough of a win in my book. Regardless, it's always nice to see Princess Charlotte show off her playful side at public events. But would you expect anything less from the queen of sass? The answer is no.