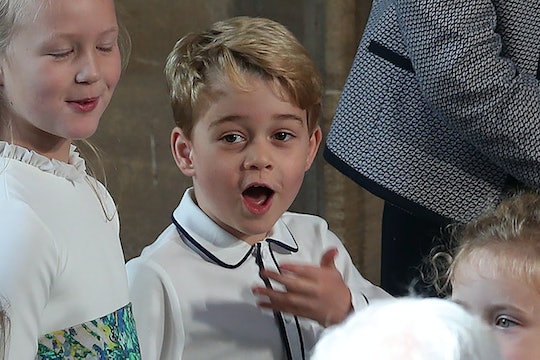 Prince George Got A Super Rare Gift From David Attenborough

There are definitely perks to being kids in the royal family other than the palaces, the wealth, and all that jazz. There's also hanging out with famous folks you might have otherwise never met. Just recently, for instance, Prince George met one of his favorite celebrities and even got a super cool gift that will definitely make him the envy of all of his friends.

Over the weekend, the 7-year-old son of Kate Middleton and Prince William was treated to a meeting with documentary filmmaker Sir David Attenborough, along with his 5-year-old sister Princess Charlotte and 2-year-old brother Prince Louis. Now, a documentary filmmaker might not seem the likeliest of candidates to be a favored celebrity for a future king, but, as Hello! Magazine reported, Middleton told school kids in April that Prince George had been watching a lot of The Blue Planet, Attenborough's stunning docuseries all about the oceans and the sea creatures living beneath the waves. As such, Attenborough became something of a favorite celebrity in the royal household.

While Middleton has met Attenborough several times, according to Town & Country, Prince George and his siblings had the chance to meet the famed natural historian at Kensington Palace when he was there for an outdoor screening of his new film, A Life On Our Planet. And based on Princess Charlotte's reaction to meeting him captured in photos shared on the Kensington Palace Instagram page, Prince George is probably not the only Cambridge child who's a fan of Attenborough.

As if meeting Attenborough wasn't enough, Kensington Palace shared on Instagram that "Sir David gave Prince George a tooth from a giant shark, the scientific name of which is carcharocles megalodon (‘big tooth’)" during their meeting. As Kensington Palace explained, the tooth was found by Attenborough on a family trip to Malta two decades earlier and it's also twice the size of a Great White shark's tooth.

It certainly makes sense that Prince George would be a wildlife enthusiast. After all, his great-grandmother Queen Elizabeth has long been a friend of Attenborough's, according to British Heritage, while his grandfather Prince Charles has been a staunch environmental activist for decades. His father Prince William is following in those footsteps with a new ITV documentary of his own to be released called Prince William: A Planet For Us All. In a clip from that documentary, Prince William talks about wanting to leave a legacy of a healthy planet of his kids. "Now I’ve got George, Charlotte and now Louis in my life, your outlook does change. You want to hand over to the next generation, the wildlife, in a much better condition," he said.

It seems as if Prince George is well on his way to being a wildlife fans of epic proportions himself. That shark tooth certainly won't hurt matters.