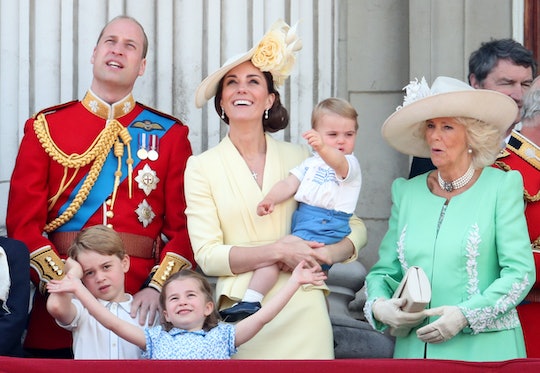 Prince George & Princess Charlotte Have Each Other's Back At Play Dates

There's a delicate balance that generally needs to be respected when it comes to play dates and siblings. I know with my sons I had to be very careful about it, get real deep down and psychological about things. Because my boys are all close in age they would often be invited to the same play dates and this was not always a popular idea. Sometimes they just wanted to be their own people, you know? I guess this isn't necessarily the case, perhaps especially when you happen to be royal siblings. Prince George and Princess Charlotte reportedly "lean on each other" at play dates, and it actually makes total sense.

The 6-year-old son and 4-year-old daughter of the Duke and Duchess of Cambridge are obviously being raised in rather a rarefied situation. The divide their time between living at Kensington Palace, their family's country home of Anmer Hall in Norfolk County, and of course the rest of the royal homes of Balmoral Castle in Scotland and beyond. Being raised in that sort of privilege does come at a bit of a price, of course; their lives are so different from those of other children it can be difficult to relate.

Which is why it's good news the two children (who are also big brother and sister to 1-year-old Prince Louis), are apparently so close.

A royal insider told People that the two children might be very different from each other but they are also incredibly close:

They are close in age, and they spend so much time together.

These differences could potentially help the two children support each other. After all, Prince George is apparently a bit more reserved while Princess Charlotte has become the kind of kid who really just loves sticking her tongue out at reporters every chance she gets. It's all about balance, right?

The two children have reportedly learned to look to each other for comfort when they are at play dates with children who don't happen to live in a palace or have to deal with paparazzi on the regular, as per People:

Play dates [with outsiders] can be tricky, so they learn to lean on each other.

Play dates can be difficult social situations to navigate no matter who you are, let alone if you're third and fourth in line to sit on the British throne like Prince George and Princess Charlotte. Fortunately for them they have more than just each other to lean on, they also have two parents who are very focused on giving them as normal a childhood as possible. For instance, Prince William told the BBC that the couple have not yet told Prince George he will presumably be king one day:

There’ll be a time and place to bring George up and understand how he fits in, in the world. But right now it’s just a case of keeping a secure, stable environment around him and showing as much love as I can as a father.

Some day down the road, Prince George, Princess Charlotte, and Prince Louis will all become much more aware of their roles in the royal family. Life will change and so will they.

But for now, they get to just be siblings who get nervous at play dates. And they get to lean on each other. Here's hoping that will help them down the road.