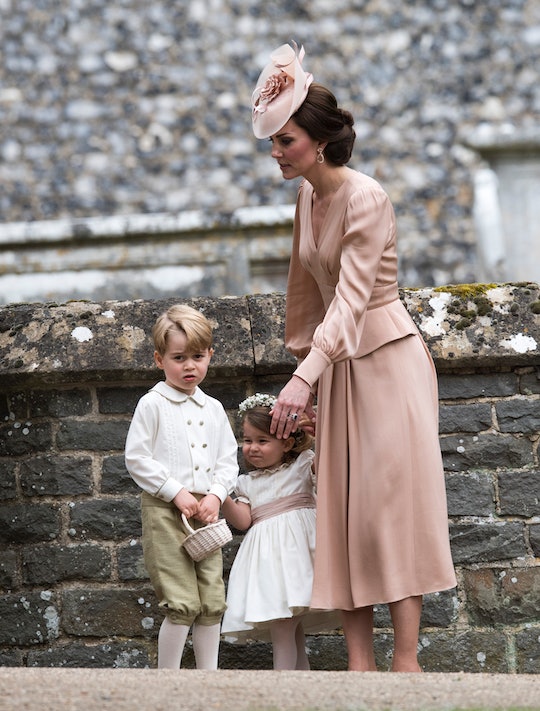 The event of the season is actually just around the corner. Prince Harry and Meghan Markle will be tying the knot in just a month on May 19 and as more and more details are revealed, it's getting harder to contain all the excitement. For example, Prince George and Princess Charlotte will be in the royal wedding, according to a new report, and they'll have the absolute cutest roles. Although not everyone will be able to celebrate the royal wedding in person, just knowing that the two little royals will (probably) be part of the wedding party is seriously enough to tide anyone over.

The two royal kiddos had the exact same roles in their aunt's wedding less than a year ago, and next month, they'll both get the chance to reprise their roles in their uncle's wedding to Markle. The royal wedding is already going to be a historic day, but now that Prince George and Princess Charlotte reportedly have roles, well... grab your popcorn because it's going to be an adorable affair.

There are still a lot of unknown details surrounding Markle's wedding to Prince Harry, but it has been confirmed that the royal wedding will take place at St. George's Chapel at Windsor Castle at 12 p.m. local time, according to Vogue, as well as Kensington Palace. It's sure to be a happy occasion and will happen just in time for Kate Middleton to be in attendance after giving birth to her and Prince William's third child, who is due sometime in April.

However, it's still unclear whether or not the new royal baby will be at the wedding along with the rest of the family, which is totally understandable, considering he or she will likely only be a few weeks old by the time the wedding rolls around. But you never know; the royal family moves pretty quickly in terms of recovering after birth. For example, after Middleton gave birth to her last two babies, she emerged back into the public space fairly quickly and dealt with more paparazzi than the Kardashians.

Until there's more information out there about Middleton's third child, though, royal fans can expect to be thrilled to see pictures of the other royal tikes at their uncle's nuptials. According to Marie Claire:

It is expected that the little Princess will be in an all-white dress and Prince George will waive the blouse and silk knickerbockers, courtesy of a "military theme."

Of course, there's been a lot of talk about Markle's outfit too, which, ya know, makes sense considering that she's the bride. But really, the fact that the two cutest toddlers in all of England will be in the wedding party might just be the cherry on top of the (wedding) cake.

As for Prince George and Princess Charlotte's parents, it's expected that Prince William will stand by his brother's side on his big day, as Prince Harry was Prince William's own best man at his wedding in 2011, according to ABC News.