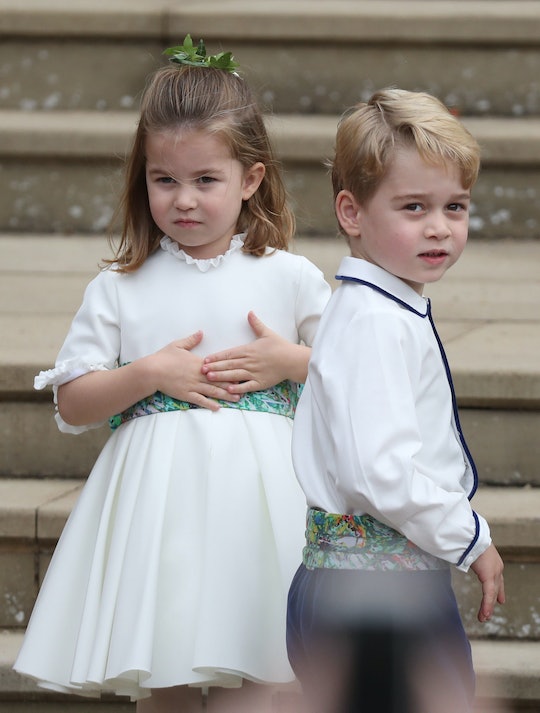 When you think about Prince George, Princess Charlotte, and Prince Louis' grandparents, Prince Charles of Wales and the late Princess Diana probably come to mind. However, on their mom's side, they have another lovely set of grandparents. And with Christmas (and lots of family time) around the corner, Grandma Middleton shared her Christmas tradition with Prince George and Princess Charlotte (and, perhaps starting this year, Prince Louis).

Kate Middleton, Duchess of Cambridge's parents are Carole Middleton and Michael Middleton. The couple lives in Bucklebury, England and co-own a party-planning business called Party Pieces, which Kate used to work for, according to CNN.

Recently, Carole sat down for an interview with The Telegraph, where she explained that she puts an extra Christmas tree in each of her grandchildren's bedrooms. The reason? “So that they can decorate it themselves," she told The Telegraph, as reported by People.

Honestly, that's pretty genius — this way, the kids can let their creativity flow when it comes to tree-decorating, but the adults can still have a classy-looking main tree in the house's common space.

According to Town & Country, Kate Middleton and Prince William of Cambridge celebrate Christmas with their respective families every other year. I'm sure Carole and Michael are excited to have the family joining them this December, since not only is it Prince Louis' first Christmas, but it's also Pippa Middleton's son Arthur's first Christmas.

Carole shared a few other Christmas plans in her interview with The Telegraph. She revealed that she has been preparing for Christmas since Halloween, and that her Christmas day menu is going to be a little different than usual this year. "I’ve recently gone vegan. Or maybe that should be flexitarian. If I go to someone’s house for dinner, I’m not going to make a fuss," she told the newspaper, as reported by The Evening Standard. "For Christmas, I’d probably have two options — very traditional and something vegan."

There's a good chance that Carole and Michael will have all three of their children home for Christmas this time around. In a recent interview with German TV channel Leute Heute, Kate's brother James Middleton opened up about Christmas at his parents' home. "I welcome people into our family home... I want it to feel like it's their home," he told the station, as Hello! reported. "There'll be turkey, champagne and some wine... For me it's all about family… It's one where we can all regroup."

And visiting Carole and Michael's Bucklebury house is not Will and Kate's only Christmas plan this year. This week, the Duke and Duchess are giving back to their community with events in London and Cyprus "in support of deployed military personnel and their families who will be apart over the festive period," according to a tweet by Kensington Palace. "Across these two engagements Their Royal Highnesses wish to deliver a message of support to deployed personnel and to acknowledge the fact that many Serving personnel are away from their families at this time of the year," the Palace's Twitter account added.

As Harper's Bazaar reported, the parties will have a strong focus on the children of deployed military personnel. There will be stations where kids can "decorate stockings, make snow globes and craft Christmas crackers," the outlet explained.

Here's hoping the extended Middleton family has a lovely Christmas together — who knows, maybe even a new family photo will come out of the celebrations!