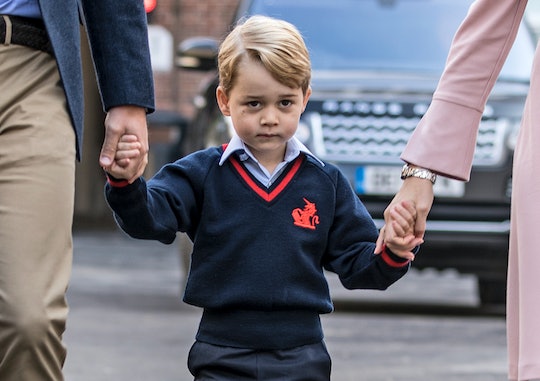 There's already been some talk that young Prince George has a number of monikers working for him. Whether it's different variations of his last name (due to the fact that royals have often used their titles as a surname) or it's previous reports that he has an entirely different first name to friends, it hasn't been totally clarified what people who know the future heir to the British throne actually call him. Now comes news that the elementary-schooler and eldest of Prince William and Kate Middleton's three kids may also go by something else entirely day-to-day: Prince George reportedly has a nickname at school, and it's pretty darn cute.

As The Cut noted, George was said to have told someone at some point that his name was "Archie," according to reporting from The Sun.

Apparently, though, whether that was ever true or not — George is only turning 6 in July, after all, as another article from The Sun confirmed — it's now being reported that, on a daily basis, the young royal is known as "P.G." at school, presumably short for "Prince George."

As Vanity Fair detailed, life for George at Thomas's Battersea, a private school in South London, is shockingly normal.

"George is really happy at school, [and] his nickname is P.G.," a parent at the school explained to the publication.

"He’s very popular and has lots of friends, and there’s very little fuss made about who he is," the parent continued. "Either William or Kate do drop off, and they are always very friendly. William particularly loves to have a chat with some of the other parents and he works out with some of the mums at the Harbour Club after drop off. He’s very chatty and amiable."

OK, let's just stop and process this for a second.

So William and Kate are so normal, they indulge in post drop-offs chats and even workouts? This is astounding.

I'm from L.A.; we have celebs at every corner. There's even one or two at schools and classes my kids go to. And while they're never mean or anything, generally, these golden people don't stop and shoot the breeze. Because they know they are being ogled, and maybe they worry someone might hear something random and call a tabloid with the supposed "dirt."

The result is that these poor parents have it rough when it comes to making "mom" friends like regular folk can. Or maybe they are just so busy, someone else does the dropping off, anyway.

It's pretty admirable that the Duke and Duchess of Cambridge manage to navigate parenting and being part of their school community with such apparent ease.

It sounds like George is as popular as his folks.

And George even has a family member at recess: cousin Maud Windsor, the daughter of Lord Freddie Windsor and Sophie Winkleman, Vanity Fair reported, according to Town & Country magazine. (All of which makes it an almost slam-dunk guess that Princess Charlotte, almost 4, will join her brother by enrolling at the school in the fall, the publication added.)

William and Kate — just glimpsed out and about with their kids and the cousins at an equestrian event not far from their country home, as Elle noted — seem bound and determined to be the first generation of royals to balance both duty and family time. It's got to be a juggling act, but this clan is pulling it off. And "P.G" seems to be thriving, too.