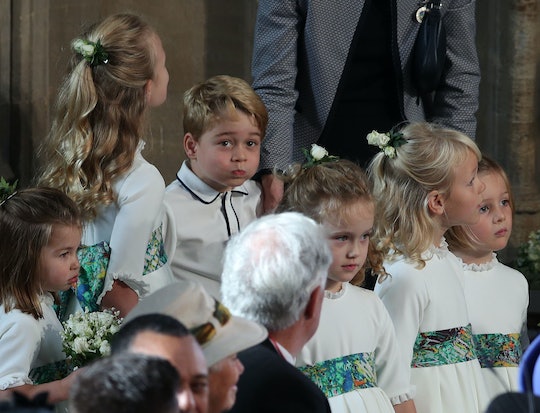 8 Of Prince George's Most Adorable Moments Of 2018

2018 has been a big year for the royal family — Prince George of Cambridge included. George welcomed a new baby brother, he was a pageboy in more than one royal wedding, and he started Year 1 at school. For a 5-year-old, that's quite the trip around the sun! So as 2018 comes to a close, now seems like the perfect time to reminisce over Prince George's cutest moments of 2018.

Even though it's been such a busy year for the royal family, Prince George didn't appear in quite as many photographs as he has in the past. Not to mention, he's usually pretty camera shy compared to his younger sister, Princess Charlotte of Cambridge. At multiple family events this year, Princess Charlotte directly addressed the cameras, while Prince George opted to keep a lower profile. But as the year went on, George started to open up more at public events.

Prince George turned 5 on July 22 of this year. When Kensington Palace released a new portrait of him for the occasion, fans got an up-close look at just how much the heir to the throne has grown over the past year. (Don't worry, you'll see that photo in just a sec.)

So without further ado, here are eight of Prince George's cutest moments this year.