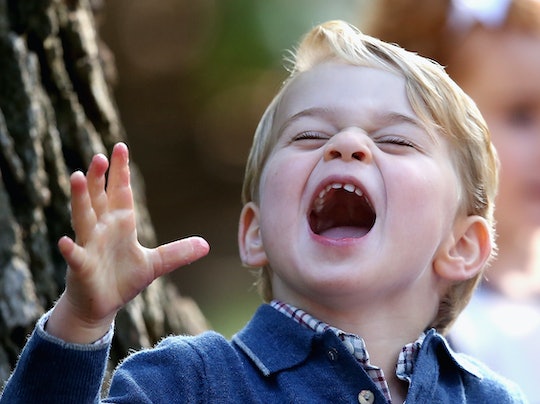 You just have to love a kid who picks something of a theme with his interests and then sticks with it. Because truly, does this not make every birthday and holiday so much easier? This is yet another reason for fans to adore young Prince George. Not only is he adorable and a bit cheeky, he also loves himself a good old theme. How do I know this? Well, according to USA Today, Prince William recently revealed Prince George's new favorite movie, and it totally lines up nicely with one of his other interests.

During a recent visit to Northern Ireland, the Duke and Duchess of Cambridge spent a whole lot of time getting to know some of the children in the area. At one event in particular, a visit to the charity Cinemagic that uses the magic of film to inspire young people, naturally the subject of favorite films came up. According to E! News, it seems a young boy named Regan was at the event and was making a dragon out of bits of colored paper.

Prince William told Regan, according to USA Today, that his own 5-year-old son's favorite film was actually How To Train Your Dragon, which makes total sense when you think about it.

You know, because he also loves dinosaurs and everything.

Stay with me here. OK, I know the movie How To Train Your Dragon has nothing to do with dinosaurs. But dragons sort of look like dinosaurs, don't they? I know my own son casually danced back and forth between his love of dinosaurs and love of dragons as though the two were perfectly symbiotic to him. And considering Prince William told people at an event in September at the Acorn Children's Hospice that his son was "obsessed" with dinosaurs and the family were "learning all about them," according to Hello! Magazine, this seems like a natural jump, don't you think?

I have another brilliant theory as to why Prince George might love the movie How To Train Your Dragon; perhaps he sees something of himself in the main character Hiccup.

The son of a clan chief whose family has always fought dragons, but Hiccup wants to find a different way. He wants to work with them and train them. In other words, he wants to go his own way. Maybe Prince George has a vision for the future of the British monarchy, and he wants to be like Hiccup and change the way things are done!

Or he just thinks the graphics are cool and the story is fun. I could be reading slightly too much into this.

I think realistically speaking, the one thing we can all take away from this information is that Prince William is a hands-on parent. He might have a busy work schedule and heavy obligations as the future King of England, but he seems to know his son pretty well. And not just that, he seems to embrace him for the little human he is, prince or no prince.

Honestly, I feel like Prince William could give Hiccup's dad a lesson or two.