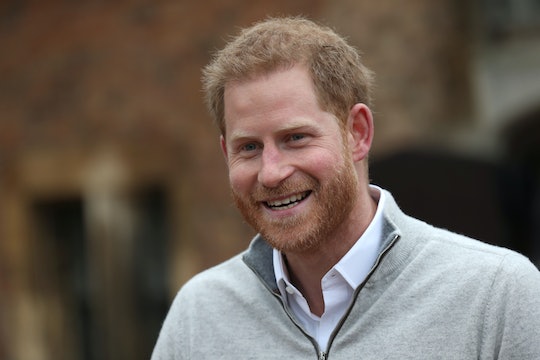 First came the giddy announcement via Instagram that he's officially a dad. Phrases were mentioned like "absolutely thrilled" and "over the moon." Then came waves, handshakes and the official palace clipboard that Baby Sussex had arrived to join the growing-like-a-weed Windsor clan's next generation. But right now, something is likely happening to the day's most famous new dad: He's probably getting tired. Prince Harry admitted he had two hours of sleep last night... and all I have to say is welcome to the club.

“We are pleased to announce that Their Royal Highnesses The Duke and Duchess of Sussex welcomed their firstborn child in the early morning on May 6th, 2019. Their Royal Highnesses’ son weighs 7lbs. 3oz." ye royal Instagram read (that's Harry and Meghan's shared account to you). “The Duchess and baby are both healthy and well, and the couple thank members of the public for their shared excitement and support during this very special time in their lives.”

As People reported, the Duke of Sussex gave an (adorable, heartwarming) testimonial to let fans know that his baby boy with bride Meghan Markle is here... and after the cameras stopped rolling, he added a little more info.

Like the fact that he had maybe gotten two hours of shut eye the whole night (this portion of his comments won't be found on his Instagram version of the clip, FYI, he gave extra comments to Sky News, People added.)

Hello! magazine added that in between giving the essentials regarding Markle and the baby being healthy, Harry gave some off-the-cuff quips. To me, he seemed more off guard than usual with the press, with whom the prince has had a love-hate relationship, as Business Insider noted.

All of it is probably due to the fatigue and emotional nature of the day.

First, Hello! noted, he apologized to the camera crew for not wearing a tie. A little later he noted thetwo hours of sleep he thought he had totaled, and then he made a joke about not really noticing that the royal horses, George and Sir John, were in the background as he delivered his happy news.

"I haven't been at many births," the prince noted. "This is definitely my first birth – it was amazing, absolutely incredible. I'm so incredibly proud of my wife. And as every father and parent would say, your baby is absolutely amazing. But this little thing is absolutely to-die-for so I'm absolutely over the moon." (Harry added in a couple of days, he and Markle will let the world catch a glimpse of the heir, Hello! detailed.)

This is not-so-sweet of me, but as much as I love this couple, I'm also a bit glad they seem so unpolished in this moment. His usual well-cut suit and dashing medals were replaced by, dare I say it, dad clothes?

Why do I feel this way? Because those of us who have been through the newborn phase with a child are members of a club.

No matter how much help you have in the house — no doubt the Duke and Duchess of Sussex will hire a nanny, not to mention Markle's mom, who was already at Windsor Castle — a new baby will take it out of you. You will be so tired when driving, you will not know where you are. You will hear a song you love, and wonder what the name of the artist is.

This experience goes by many names... sleep deficit, the fourth trimester, life for every prior generation who never talked about it... but no amount of money or prestige can protect you from the exhaustion (if you are actually caring for your own baby, that is).

It gets better. The infant gets the hang of it, but you always vaguely remember what it feels like to function on two hours sleep. To know what a general in battle feels like. Finding a way to get the job done. It's actually sort of strangely badass. And now, Prince Harry is has joined the ranks.