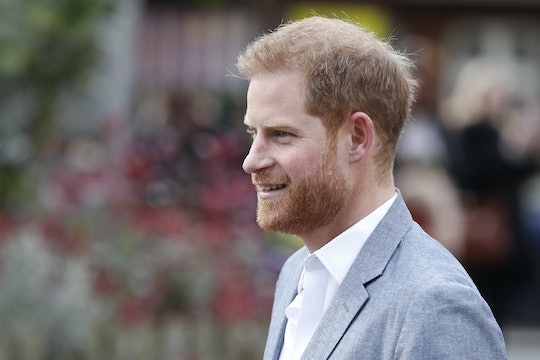 Prince Harry Did Ballet With Some Kids & Yup, The Video Is As Sweet As You Think

I'm starting to suspect that Prince Harry is trolling us all. He knows how excited royal watchers are to see him become a father. He knows there might be some of us who are watching his every move to gauge what kind of father he's going to become — not that there has ever really been any doubt he would be a super fun dad. And so he shares these precious, adorable moments just to keep us dangling. Perhaps I'm being paranoid, but Prince Harry doing ballet with kids in this video feels like he's toying with my heart strings. And you know what? I'm fine with it.

Prince Harry was visiting a YMCA youth program in Easling, a town to the west of London, on Wednesday as part of his continued work to promote youth mental health awareness, according to the Daily Mail. While there, the prince met up with several adorable children who were in the middle of a ballet class. Perhaps taking a lesson from his brother Prince William and his sister-in-law Kate Middleton's eye-level parenting approach, Prince Harry crouched down in front of one little boy and asked him what his favorite part of the class was. It was "the balance challenge," as The Mirror reported, where the kids have to stand on one leg and balance a disc on their head.

Of course, as seen in Rebecca English's footage on Twitter, Prince Harry asked for a demonstration and joined right in. Although to be fair, he didn't have a disc on his head so it was slightly easier for him.

Prince Harry's balance was pretty solid, doubtless because of all the yoga he is reportedly doing these days with his pregnant wife, Meghan Markle. In fact, the Daily Express reported that the couple are planning on doing yoga during Markle's labor, which is expected to happen later this month.

The Duke of Sussex is so comfortable with balance poses that he offered the children a piece of advice for how to maintain balance, according to The Mirror: "Pick a spot and stare at it."

The older kids weren't the only ones at the YMCA in Ealing to enjoy a little dad charm from Prince Harry. As you can see in more of English's footage, a mother was there with a baby in her lap and Prince Harry was crouched down with the little one in about two seconds flat.

In the video, Prince Harry asks the mom if she's getting any sleep, and this tells me he is well prepared for impending fatherhood because he knows he won't be getting any sleep for ages. Not that he appears to care; he told the baby's mom, "I love that face!" and had her smiling for him without barely trying, according to USA Today.

He's got the magic touch, I think.

For years now Prince Harry has made it clear he really loves kids during his royal engagements, so now it's going to be super exciting to see him with his own little one. Videos like these will just have to tide us all over until he's sharing videos with his own baby... and maybe even going to Daddy and Me ballet classes now that he's had a taste.