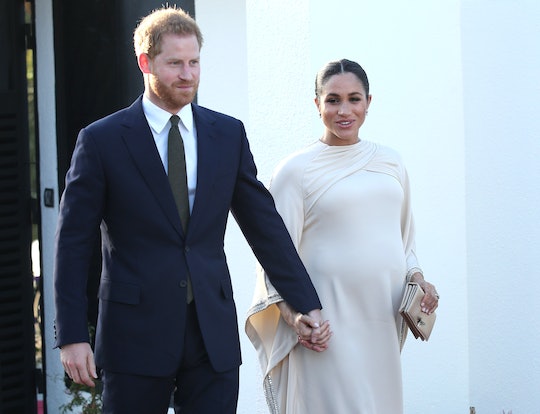 There's Video Of Harry Explaining Meghan's Pregnancy To Kids & Yup, It's Too Cute

As the work week comes to a close, many people are probably in the market for a pick-me-up to get them through until the weekend hits. One option that will likely bring a smile to your face is this video of Prince Harry explaining Meghan Markle's pregnancy to an excited group of schoolchildren. The video is incredibly adorable for many reasons, but especially because the Duke of Sussex seems so excited to become a dad. Squee!

Even before Prince Harry met Markle, he has had a way with kids. During the 2017 Invictus Games, for example, the Duke of Sussex was a great sport when a toddler nabbed some of his popcorn without asking, according to Vanity Fair. Prince Harry was amused by the little girl's antics, and he chatted and played with her throughout the event.

Or what about that time when, in July 2018, Prince Harry jokingly wagged his finger in the face of a little kid who pulled on Markle's hair?The Duke of Sussex's personality is relaxed and fun, so it's no surprise kids gravitate towards him.

Further demonstrating his ease interacting with kids, Prince Harry was spotted explaining Markle's pregnancy to a young kid at St. Vincent's Catholic Primary School in Acton, England, on Wednesday, according to POPSUGAR.

Journalist Valentine Low drew attention to the moment, captioning a video on Twitter: "Here's Harry explaining to schoolchildren that his wife is going to have a baby."

The audio is a bit difficult to hear (spoiler alert: kids are loud), but you can see Prince Harry gesturing a bump shape with his hands. I can't say for certain, but I think the Duke of Sussex said to the child, "My wife has a baby in her belly."

I know many people have royal fatigue at the moment (Kate Middleton's third pregnancy and Markle's wedding was a lot to cover in a few short months), but it's hard to deny how cute this clip is. From Prince Harry's sweet hand gesture to how natural he is with children, the moment is heartwarming.

Speaking of heartwarming moments, one of the kids wished Prince Harry good luck with the baby via the most perfect drawing. Isn't the itty bitty baby at the bottom amazing? I like it's little curl of hair.

As for fan reactions to the sweet visit, Prince Harry's supporters can't get enough.

"Oh my God I love this prince, he really will be a good father," one person wrote.

Someone else said: "You just know Harry is on pins and needles waiting for his baby to be born."

"This is so cute," one person commented.

People should probably soak up these moments of Prince Harry while they can because there's a possibility he'll go on paternity leave.

It’s a modern thing. Prince William did it for his children and Harry’s going to do it for his, when his child is born. I mean, the older generation didn’t do it. The older generation just got on with it. But it’s a new thing. People do it, William did it and Harry is going to do it. [The length] depends on him. I would have thought no more than about two or three weeks.

If the Duke of Sussex does go on paternity leave, this video is a good one to watch in his absence. Long live the cuteness.