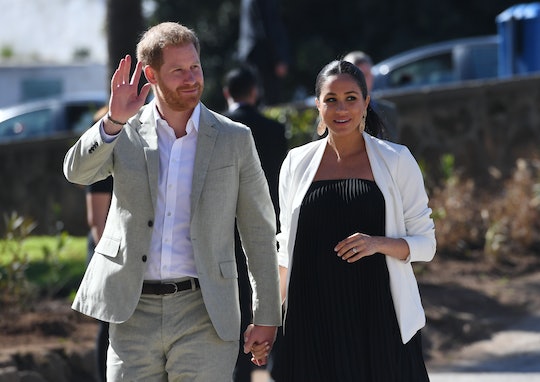 Clearly the honeymoon phase hasn't worn off between Prince Harry and Meghan Markle. The royals recently took a trip to Morocco, which was filled with adorable couple moments, including one in which Prince Harry was caught fixing Meghan Markle's hair after it shifted while she tried on a necklace gifted to her by a local craftsman.

The adorable moment, as People reported on Monday, was caught on video and taken during the couple's final day in Morocco. They spent it in the capital city of Rabat, according to the Daily Mail, touring crafts stalls run by social entrepreneurs. One of the many business people patronized by Prince Harry and a very-pregnant Markle gifted the former Suits star with the piece of jewelry, slipping it over her head. In the process, Markle's ponytail was caught beneath the chain.

Prince Harry quickly took notice, as any good husband would, and adjusted his wife's hair. The 34-year-old royal then gently rubbed her back, upping the adorable ante.

Fans took notice of the subtle, yet sweet, gesture, and were in awe of the sheer chivalry, gushing about it on Twitter. "Awww! Harry fixing Meghan’s hair. He is such an attentive husband," one person commented on a clip of the video.

This was not the first time Prince Harry has been on hand for a quick hair fix. As royal fans may recall, during a celebration of the release of Markle's charity cookbook, he was seen adjusting her hair after a gust of wind blew it straight into the air, according to Entertainment Tonight.

Markle shouted, "Sorry!" as her husband ran his hands over her head to put each strand back in place. Who needs a glam squad when you've got a husband like Harry?

The most recent hair-related emergency was just one of many precious moments between the parents-to-be during their stay in Morocco.

Early in their trip, PopSugar reported that the couple rushed to greet two half-Moroccan, half-British fans who appeared nervous to approach them. The young fans were spotted waving flags from both countries, according to the outlet, and were able to shake hands with Prince Harry and Markle and chat a bit. According to Yahoo! Lifestyle, Markle rushed ahead of her hubby to meet with the girls.

Prince Harry reportedly complimented the girls on their matching dresses, according to People, while Markle allowed them to admire a henna tattoo she got on her hand to celebrate her pregnancy. The duchess was later seen crouching down to eye level with one of the girls, believed to be just 2 years old, for yet another special moment.

The following day two more eager fans greeted Markle with a banner and flowers, which PopSugar reported they were able to give to her personally. The Duchess of Sussex is said to have stopped to say hello to the girls before collecting the sweet gifts they prepared for her. But whether they were flanked by fans, or out on their own, Prince Harry and his wife made sure to stay close by one another. Ah, to be young and in love.

Royal couples typically don't engage in much PDA, but Prince Harry and Markle don't play by those antiquated rules and the public don't seem to mind in the slightest.