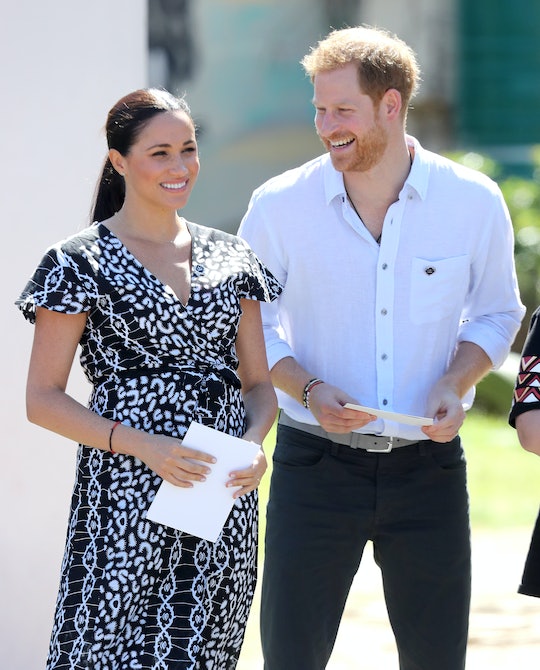 The Duke and Duchess of Sussex have officially kicked off their royal Africa tour, arriving in the country of South Africa on Monday. And their first stop has already given fans something to swoon over, as cameras caught a moment of Prince Harry fixing Meghan Markle’s hair in the most adorable fashion. The sweet couple was at a stop in Nyanga, in Cape Town, South Africa when the truly adorable moment was captured by cameras and, thankfully, promptly shared on Twitter.

Markle and Prince Harry are somewhat well-known for their cute PDA moments, but this gesture might be their sweetest yet. As they were posing with school children in Nyanga, Prince Harry was seen putting his hand on his wife’s shoulder. Catching a lock of her hair under his hand, Prince Harry quickly and gently smoothed Markle's ponytail down her back for her — just before they smiled for a picture.

"No need to travel with a hair stylist when we have Harry," one Twitter user commented on the sweet video. Another said, "OMG just when you think they can’t get any cuter!!"

The Duke and Duchess of Sussex are traveling with baby Archie on this royal tour, though they left him with a sitter during this stop, according to People. Traveling is exhausting, after all. And for their first day, they spent time at a workshop for an NGO named Justice Desk, which educates children on self-empowerment and self-defense.

Prince Harry gave a speech at the event, noting the need to break cycles of violence. According to CNN, he said: "I wanted to ensure that our first visit as a family, with my wife by my side, focused on the significant challenges facing millions of South Africans, while acknowledging the hope we feel so strongly here... No man is born to cause harm to women. This is learned behavior and we need to break that cycle. My role is to defend my wife and be a positive role model for my son."

Markle also made a powerful speech, focusing on the rights of women. "The rights of women and girls is something that is very close to my heart … I know that when women are empowered the entire community flourishes," she said, according to ELLE. "On one personal note, may I just say that while I’m here with my husband as a member of the royal family, I want you to know that for me, I am here has a mother, as a wife, as a woman, as a woman of color and as your sister."

Speaking of being an example for his son, this isn’t the first time Prince Harry has been caught sweetly helping Markle with her hair, once it was even during another royal tour. For instance, when the couple visited Morocco, they spent some time with local crafters, according to Entertainment Tonight. Some of them wanted to show off their goods, including one man who put a necklace around Markle’s neck. Prince Harry reached behind her to pull her ponytail out from under the chain.

Another cute moment came during an outdoor event for the launch of Markle’s community kitchen cookbook, Together: Our Community Cookbook. A gust of wind swept up and her long hair went flying into Prince Harry’s face, according to TODAY. He somewhat awkwardly, but totally adorably, took his hands and smoothed down her tresses.

This isn’t the first time we’ve seen this precious, tender gesture from Prince Harry, and probably won’t be the last. And that’s great, the world can always use moments like these showing kind men doing sweet things.