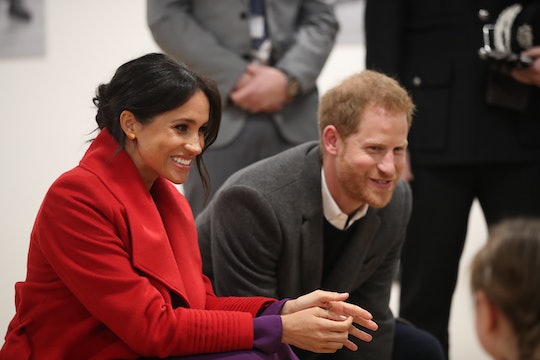 Waiting for the arrival of your first-born is stressful, to say the least. Add to that the fact that you are sixth in line for the British throne and are under the constant scrutiny of family and commoner alike, and you have the perfect storm ripe for anxiety. Prince Harry and Meghan Markle are awaiting the birth of their first child. All the while, they're continuing on with their royal duties and even moving into a new house together in Windsor. So how are they getting through it all? Even royals need a little help sometimes. Prince Harry has a daily habit to help stay calm while waiting for the royal baby and it's something that might be helpful to others dealing with life's chaos, as well.

Since marrying Markle, Prince Harry has become an avid meditator, according to People.

The revelation came this week during the couple's visit to Birkenhead, their first public engagement of the year. There, Prince Harry met a 69-year-old Buddhist monk who gave him a copy of 8 Steps to Happiness when he found out that Harry has started meditating, according to People.

And he reportedly has Markle to thank for this new-found coping skill. Markle has been a long-time fan of meditation and yoga and outlined her love for it in a 2015 post on her now defunct blog, The Tig, according to Bustle. She learned Vedic meditation from her meditation teacher, Light Watkins, as per The Sun, while she was knee-deep in filming Suits.

"Not gonna lie, I rolled my eyes thinking 'Oh give me a break, mystic man.' But low and behold, this mystical man was right. I can’t put my finger on the why or the how, but I will tell you this much, for me… I am just happier," Markle wrote on her blog, according to The Sun. "And meditation has much to do with that. I know you’ll think of a million excuses as to why this is silly or why you don’t have time for it; much like the day I told Light I didn’t have enough hours in the day to do it, and he told me that’s why I needed to meditate twice as much."

Meditation is especially helpful for those who live fast paced, demanding lifestyles, according to Watkins.

So, what is Vedic meditation? During Vedic meditation, you sit comfortably in an upright position with your eyes closed, while you repeat a mantra in your head in order to obtain a place of peace and stillness, according to Vedic Path Meditation.

Meditation of any kind has been found to reduce stress, control anxiety and improve mental health as part of an overall self care plan, according to Healthline.

"I took her through it and she had wonderful experiences," Watkins told InStyle. "She really appreciated the training and getting structure. And then I think we connected a couple times. She just kind of checked in and said, 'Hey, things went well. I’m meditating every day twice a day — it’s wonderful. Once in the morning for 20 minutes, once in the afternoon for 20 minutes.'"

Markle is currently six months pregnant with the couple's first baby, due in April. But don't expect to find out the sex of the baby anytime soon. The royal couple wants it to be a surprise. The baby will be seventh in line to the throne when it's born. But, this may all change if Prince William and Kate Middleton have another child. If that were to happen, Harry and Meghan's baby would fall further in the order of succession.

It's rumored that the Duke and Duchess of Sussex will be adding a yoga studio to their new home in Windsor, according to The Express.

Couples that meditate together, stay together. And if they keep up their daily rituals, it might just help them relieve some of that pre-baby stress — and any additional stress that may come their way after the new royal baby is born.