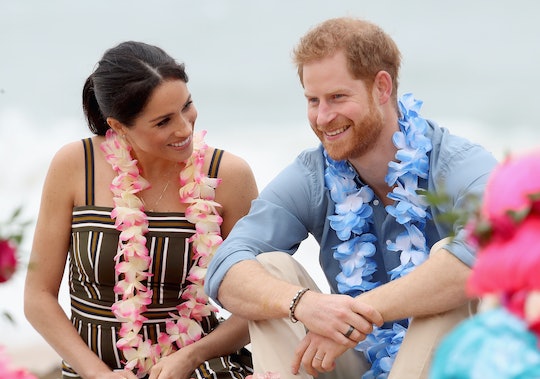 Anyone who has ever been pregnant knows that no matter how exciting and wonderful it may be to be growing a human, it can be pretty challenging, too — especially when it comes to giving up otherwise-enjoyable things like alcohol, caffeine, and sushi. Now that she's well into her second trimester, Meghan, the Duchess of Sussex, is likely used to abstaining from wine and copious cups of coffee, but it sounds like she doesn't have to worry about being the only one at the table who isn't indulging. In fact, her husband Prince Harry has reportedly given up these vices during Meghan Markle's pregnancy as well, according to The Express, and it's a thoughtful show of support from the royal dad-to-be.

By the time Meghan and Harry publicly announced their pregnancy ahead of their overseas tour in October, the duchess had already likely begun following the recommendation that pregnant women abstain from alcohol, and either limit their caffeine intake, or cut it out all together. But she wasn't alone: later that month, the Daily Mail reported that Prince Harry appeared to have also given up drinking during his wife's pregnancy, after he'd decided to toast with water instead of champagne at a state dinner in Fiji.

But recent reports suggest that bubbly isn't all the prince has given up in solidarity. On Monday, The Express reported that Prince Harry had also swapped out caffeine entirely for "still mineral water," and while that does seem a tad extreme (the American College of Obstetricians and Gynecologists recommends that pregnant women consume "less than 200 mg" of caffeine per day, not necessarily zero), it's also given haters a new reason to complain about his wife.

In addition to tabloid stories suggesting the new duchess is difficult, demanding, and feuding with Catherine, the Duchess of Cambridge, some are taking Prince Harry's caffeine avoidance as a sign that Meghan has "banned" her husband from drinking coffee and tea — and have even suggested it's downright unpatriotic behaviour for a Brit. But given that Prince Harry is also a fully-grown man who appears to be totally devoted to his wife and unborn child, it seems much more likely he's just choosing to give it up to be considerate.

Even if Meghan *were* somehow imposing "rules" on Harry's caffeine and alcohol intake though, it sounds like it might still be going over well with the royals. Sources reportedly told The Express that the prince is "definitely more chilled and relaxed," since giving up alcohol, and that, thanks to Meghan, he now "eats well, doesn’t poison his body, exercises, does a bit of yoga and is a lot happier."

That actually sounds quite positive, though it's also not exactly surprising that Meghan is continuing to be criticized. As happy and in love as the couple seem to be, she's been a target of unkind commentary since back when her relationship with the prince was still just a rumor, and in November 2016, Prince Harry even released a rare public statement defending his then-girlfriend from what he called "a wave of abuse and harassment" by the press and social media, according to The Telegraph.

Unfortunately though, things only became more complicated for the duchess following their engagement, when members of her own family began skewering her on television and in newspaper articles (most recently, her half-sister, Samantha Markle, told The Daily Star she felt the duchess' resolution for the new year should be to "be honest," to "show gratitude," and "to eat more chocolate to sweeten [her] disposition").

In other words? Harry and Meghan are certainly no strangers to criticism, and while it's unfortunate that news of the prince giving up alcohol and tea has somehow become a negative thing, the truth is that it's actually quite sweet to think that they've both decided to abstain during pregnancy, instead of only her. And given the inevitable sacrifices women are required to make during pregnancy, it seems that more men may want to consider following Prince Harry's example.