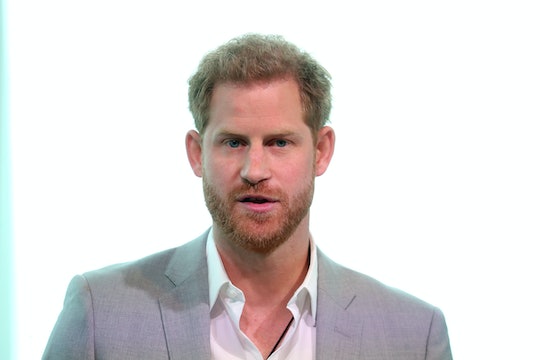 Prince Harry definitely gives us those hands-on dad vibes. Not simply because he has always been one of those guys who is really great with kids so it follows that he would be extra amazing with his own kids. It's all about the gripes. Because real parenting all boils down to the things you complain about, right? And the number one thing we all complain about? That's right, sleep. Precious, glorious, impossible sleep. Prince Harry said he's enjoying sleep on a work trip, and this is the guilty pleasure every working parent totally understands.

The Duke of Sussex and his wife of one year, Meghan Markle, welcomed their first child together on May 6, baby boy Master Archie Harrison Mountbatten-Windsor. Ever since his birth, Prince Harry and Markle have retreated a little from the public eye in an effort to get accustomed to their new lives as mom and dad. But that doesn't mean this new dad has taken a total break from his public life. While Markle remains on maternity leave until the family leaves for their South African tour this fall, Prince Harry is out working. Not that he seems to mind it, by the way. During a recent work trip to Amsterdam, Prince Harry admitted he was sort of enjoying one aspect of being out of town; all that uninterrupted sleep.

The Duke of Sussex was on hand in Amsterdam to announce his new partnership with Travalyst, an organization that works with partners in the travel industry to foster and promote eco-friendly travel. This was clearly a brilliant move on Prince Harry's part since he and his little family of three recently came under fire for using a private plane to visit longtime family friend Elton John. But beyond the whole public relations aspect of his trip, Prince Harry managed to find something else to enjoy, a night of sleep without a baby waking you up. During his speech at the Travalyst event, the new dad said as per People:

Having spent last night here — I don’t know about you guys, but it was definitely the best night’s sleep I’ve had for the last 4 months!

I'm a little worried that he shouldn't shout his good night's sleep from the rooftops, to be honest. Because Meghan Markle was presumably back at Frogmore Cottage with baby Archie having a regular night of new parent sleep with the baby... he might not want to brag. Especially considering the average parent of a young baby generally gets just over 4 hours of sleep a night, as per a study shared by The Independent.

Prince Harry isn't the only royal dad to admit that being a parent has given him a few sleepless nights. The day after Archie's birth his uncle Prince William, already a father of three himself, had this hilarious message to share with his brother, as per People:

I’m very pleased and glad to welcome my brother to the sleep deprivation society that is parenting!

The royal family is changing all the time, getting more modern and socially responsible and accessible as it does so. But one thing never changes, royal family or not. Babies are terrible at sleeping.

And even a prince will get giddy over a good night's sleep every now and then.