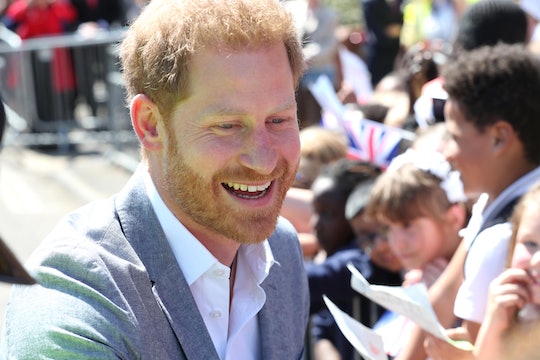 The newest royal baby is finally here, and the Duke and Duchess of Sussex have seamlessly transitioned into their new roles as parents. Following the birth of Archie Harrison, it's back to business for some members of the monarchy, and from his recent appearances, it's clear to see that Prince Harry is loving being a dad to baby Archie. Even though he's off doing his royal duties, the new dad can't stop gushing about his new son. Indeed, the 34-year-old prince recently spoke about life as a father and he quickly proved he's all about his new #DadLife.

Prince Harry recently visited the Oxford's Children Hospital, as Harper's Bazaar reported, and during the trip, he spoke with young patients and hospital staff about Archie. Among those he spoke to during the visit was Amy Scullard, a mother of two who was holding her 10-week-old baby when she met the Duke. According to the BBC, Scullard said the new dad asked her if her baby girl "was over the stormy period as babies are supposed to be grumpy for the first 10 weeks." Scullard revealed that her daughter was doing well, and royal fanatics are obviously hopeful little Archie is, too. But that's not all they chatted about; according to People, Scullard also spoke with the royal about how he's adjusting to life with a newborn.

"He said he's getting used to the baby and how Archie has fitted into family life," she shared, according to People. "He said he just feels part of the family and he can't imagine life without his son."

This is hardly the first time Prince Harry has spoken about baby Sussex and life as a new dad. For instance, during a visit to The Netherlands to promote the Invictus Games 2020, the new dad spoke with a man named Dennis van der Stroon, a former soldier, about how much he's been missing his mother, the late Princess Diana. The veteran told reporters, according to The Daily Express, that he had a heart-to-heart chat with the prince about their "shared experience of missing a mom" and how baby Archie has given him a "new focus."

"At a certain moment, we just got connected on this level," van der Stroon said, according to The Daily Express. "We talked about how my wife, Mireille, is 20 weeks pregnant with our first child, a girl, and he told me how special it was that his son has just been born. Harry talked about how having a small child was his new focus and new goal and I told him how a couple months ago, I was struggling with my mental health but my wife's pregnancy has given me a goal."

Prince Harry first talked about the royal baby the day he was born, according to ELLE. Speaking with reporters on Monday, May 6, Prince Harry said both he and Markle were "both absolutely thrilled" about their arrival and added that was "absolutely to die for," according to Entertainment Tonight. And, TBH, from the few photos we've seen of the little guy, it's impossible to disagree with that statement.

It's clear that Prince Harry has had no trouble getting used to being a father. In fact, it's becoming clearer every day that he loves this new chapter in his life, and royal fans are looking forward to seeing more of that. And lots of dad jokes, of course.