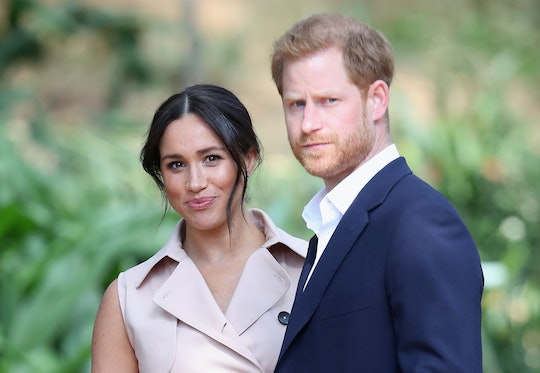 As more than a hundred deadly fires continued to blaze across Australia on Sunday, Prince Harry and Meghan Markle encouraged supporting Australia wildfire relief efforts and shared the organizations they'd purportedly donated to. The royal couple's urge for support comes as Australian officials warn that fires already reported to have destroyed millions of acres of land and decimated an estimated half billion animals, may continue to burn for months.

"Our thoughts and prayers are with those across Australia who are continuing to face the devastating fires that have been raging for months," the Duke and Duchess of Sussex wrote in a recent post shared on their official Instagram account. "It's easy to feel helpless, but there's always a way to help."

The couple then encouraged their followers to "find out how you can lend your support" and "help as we have." Included within the royal's post were links to the Australian Red Cross' Disaster Relief and Recovery fund, the New South Wales (NSW) Rural Fire Service, and the Country Fire Authority's Victorian Bushfire Relief fund. While all three of the organizations listed by Prince Harry and Markle are geared at supporting Australia's bushfire victims, fire-affected communities, or those working to combat the blazes currently burning across the country, they're not the only ways to help Australia's wildfire victims.

While encouraging support of Australian wildfire relief efforts on Sunday, the Duke and Duchess of Sussex also briefly touched on role climate change is reported to have played in Australia's unprecedented fire season as well as other recent natural disasters. "From areas we are personally connected to such as the communities and people we visited in New South Wales in 2018, to the fires in California and parts of Africa, we are struck by the increasingly overlapping presence of these environmental disasters, including of course the destruction of the Amazon which continues," the royal couple wrote. "This global environmental crisis has now been described as Ecocide."

Ecocide is defined by Merriam-Webster as "the destruction of large areas of the natural environment as a consequence of human activity." Scientists have previously warned that "climate change is making Australian wildfires larger and more frequent." In fact, USA Today has recently reported the Australian Bureau of Meteorology credited climate change with "increasing bushfire risk in Australia by lengthening the fire season, decreasing precipitation and increasing temperature."

According to the BBC, at least 24 people are reported to have died as a result of the fires since they first began in September. Although efforts to battle the blazes remain ongoing, the British news agency also reported that Australian Prime Minister Scott Morrison had warned residents that bushfires could continue to burn for months. In New South Wales alone, fire officials told NPR that 136 fires were burning in the state, 69 of which remained uncontained as of Monday.

While Prince Harry and Markle urged their followers to help support wildfire relief efforts in Australia, they weren't the only members of the royal family to send a message of support and condolence to Australia. Both the Queen and the Duke and Duchess of Cambridge have also spoken out about the fires in Australia.