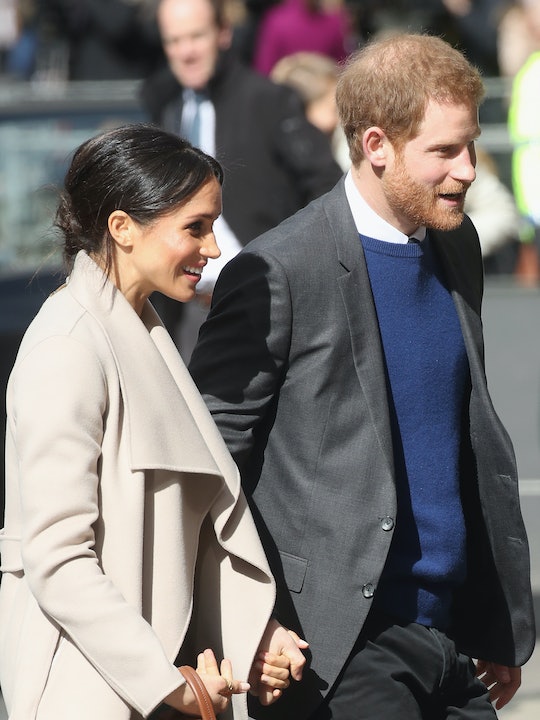 Tabloids from the United States and the United Kingdom have been trying to make a meal out of a certain narrative when it comes to the Duke and Duchess of Sussex. They've seemingly tried to paint the couple as elitists, as people who would rather fly on a private jet than hop on a commercial flight, or whatever the latest story might be. Well, please consider photos of Prince Harry and Meghan Markle's pub date with Archie as evidence for the defense. Because I suspect — as new details about the outing have revealed — this couple is trying to live a so-called regular life just like the rest of us out here.

Prince Harry and Meghan Markle moved to their newly renovated home at Frogmore Cottage on the grounds of Windsor Castle not long before little Archie Harrison Mountbatten-Windsor made his arrival on May 6. Since then, the couple have been settling into their new neighborhood and lives as parents. And apparently they have picked up a new routine as well — hanging out at the pub with their little one in tow.

The couple headed over to the Rose & Crown Pub in Windsor (which is super close to their home) "a few Sundays back," for a relaxing date night, as TMZ reported. Archie attended the outing, and the outlet even has the photos to prove it. In one photo, Prince Harry is seen holding a baby carrier, while another shot shows him holding a baby.

Although news of the pub date isn't new, photos from the hangout haven't been seen before until now. And they offer a neat glimpse into their lives, proving that Markle and Prince Harry are incredibly low-key parents.

Kensington Palace did not immediately respond to Romper’s request for comment regarding the recently surfaced photos.

The family reportedly hung out at the pub for about two hours, during which time Markle and Prince Harry enjoyed a roast beef dinner (as well as a pint of beer for Harry) and little Archie was apparently "good as gold," as an eyewitness told The Sun: "They were on a table with, I presume, a private secretary. Meghan was cradling Archie most of the time. The little lad was as good as gold, I didn’t hear him cry once while he was there."

This doesn't appear to be the first time the family has hit the pub for a little outing, as the eyewitness explained to The Sun:

No other customers recognized them. The staff clearly knew who they were but kept the service low-key. They did indicate to me they had been there before. They just chatted away like any normal couple and were laughing a lot.

What's more? Markle was spotted lugging baby gear to the eatery, proving she's no different than any mama out there.

These sort of reports, like Prince Harry and Meghan Markle taking their baby to a pub or even just heading out for a family afternoon to watch a charity polo match between Harry and his brother Prince William, contradict rumors that this couple (or Markle in particular) are elitists. Because bringing your baby along to the pub isn't a big deal, and it's a common occurrence for people who want to connect with their community from time to time. This seems to be exactly what Prince Harry and Meghan Markle want as well, no matter what the media might tell you.

More Like This
30 Adorable Baby Halloween Costumes, From Animals To Avocados
Experts Explain Whether It’s Safe For Your Baby To Sleep On Your Chest
All Of Queen Elizabeth’s Great-Grandchildren From Oldest To Youngest
The Difference Between The PICU & The NICU