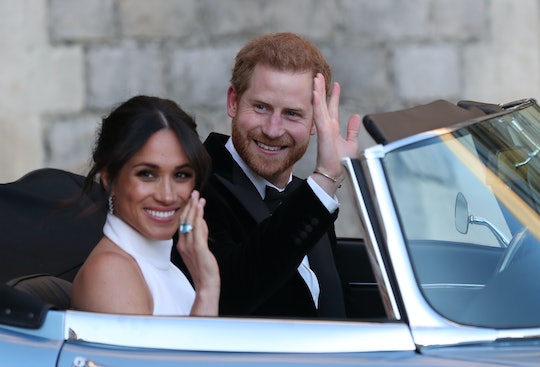 Members of the royal family is known for sharing the loveliest family photos with their numerous fans. Milestones and holidays alike are marked with new shots of the royals, and Christmas is no different. Prince Harry and Meghan Markle's 2018 Christmas card features a never-before-seen photo from their wedding reception and it will give you all of the feels.

The newly released photo marks the beginning of a tradition for the Duke and Duchess of Sussex, according to People, their personal family Christmas card. Kensington Palace released the photo, which shows the pair from looking up at a fireworks display at their royal wedding evening reception. It is captioned, “The Duke and Duchess of Sussex are delighted to share a new photograph from their Wedding Reception at Frogmore House on 19th May.” The statement also included the name of the photographer who took the photo, Chris Allerton.

Frogmore House is a country home owned by the Crown Estate, located on the grounds of Home Park Windsor, about a half-mile south of Windsor Castle, according to The Royal Household. After their wedding, Harry and Markle retreated to Frogmore for a lunchtime reception and cake cutting. And, from the looks of their new photo, the festivities concluded with a spectacular fireworks show that set a very romantic scene.

Along with Prince Harry and Markle weren't the only ones to put out a family Christmas card photo in 2018; Prince William and Kate Middleton also released a holiday card, as Cosmopolitan reported. Theirs was a family photo photo, showing the couple seated on a tree with their children George, Charlotte, and little Louis"The Duke and Duchess of Cambridge are pleased to share a new photograph of their family," it was captioned. "The photograph, taken by Matt Porteous, shows The Duke and Duchess with their three children at Anmer Hall. This photograph features on Their Royal Highnesses’ Christmas card this year."

While Harry and William took separate Christmas photos, they will be spending the holiday together this year, according to E! News. Markle, Harry, Middleton, and William are heading to Queen Elizabeth's estate in Sandringham this year to celebrate together. Don't expect to see candid and personal photos from their get together on Instagram like you would, say, of the Kardashians. But it is customary for the family to take a walk after church services on Christmas Day, according to Cosmopolitan, so you could still get a peek at their Christmas outfits.

It is fitting for Harry and Markle to release their first Christmas card as a family this year. 2018 marks their first holiday season as a married couple and 2019 will bring them their first child. Kensington Palace announced Markle's pregnancy in mid-October, tweeting this statement:

In a follow-up tweet, Kensington Palace thanked the public for its continued support following Harry and Markle's wedding, as well as the exciting news of a coming baby. The Duke and Duchess have had quite the eventful few months, to say the least.

Given the expected addition to Prince Harry and Markle's family, I have a feeling that their Christmas card next year will look a bit more like Prince William and Middleton's, a group shot with their little one. But in the mean time, while Harry and Meghan enjoy the last few months together, just the two of them, a romantic photo of the two in postnuptial bliss is beyond fitting.

Happy holidays all around!

More Like This
Andy Cohen's 3-Year-Old Son Ben Has Officially Taken Over An Important Hanukkah Tradition
How Old Should Kids Be Before They Watch The 'Christmas Story' Sequel?
Caillou's Mom Saves The Day In Peacock's Brand New Christmas Special
Surprise Your Kids With This Exclusive Sneak Peek At Mickey Saves Christmas