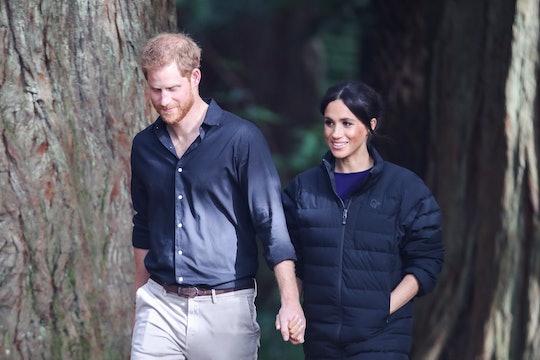 Before becoming the Duke and Duchess of Sussex, Meghan Markle and Prince Harry's holiday traditions with their respective families were presumably quite different. Since they tied the knot in May 2018, though, they've been making their own together. For the most part, their holiday celebrations have been low-key, unique, and as private as possible. And now that they're a family of three and Prince Harry and Markle will celebrate their first New Year's Eve as parents to their little boy Archie, it's probably safe to assume they'll ring in 2020 with a similar style.

This year, the Duke and Duchess of Sussex have taken a breather from royal duties for a few weeks over the holidays to spend some quiet time together as a family, as The Telegraph reported. The past two years, however, have seen the couple spend Christmas with the rest of the royal family in Norfolk County in England at Queen Elizabeth's Sandringham estate. In 2019, they've been spending time with their 8-month-old baby boy Archie in a quieter place: the west coast of Canada.

"Their Royal Highnesses The Duke and Duchess of Sussex are spending private family time in Canada," a spokesperson for Prince Harry and Markle told CNN ahead of Christmas. "They are enjoying sharing the warmth of the Canadian people and the beauty of the landscape with their young son."

As the pair have reportedly been seen going for jogs through a waterfront town on Vancouver Island, as a local restaurant owner told Marie Claire, and have also been spotted out for hikes in the woods, that could mean their New Year's Eve plans will not exactly be all glitz and glamour if they plan to stay on trend with the rest of their holidays this year.

While Prince Harry pre-family New Year's Eve celebrations were presumably a little rowdier than what he enjoys now, Markle's own celebrations from before she became a mom appear to be a bit of a mystery. She previously shared her New Year's resolutions on her now-defunct blog The Tig, and they included rules about working on self-acceptance, learning French, and keeping the door open for magic, according to Town & Country. Of course, now that Markle and Prince Harry are parents, their resolutions and plans will probably look pretty different.

In 2017, for instance, the couple jetted off to Monaco to ring in for the new year, according to the Daily Mail. Last New Year's Eve, Markle was expecting baby Archie, who was born in May 2019, and the couple reportedly returned to Monaco for the new year, according to The Cut. But as so many parents know, this could well have been a last hurrah before becoming parents.

This year, as the pair are reportedly staying on Vancouver Island where they are surrounded by nature, it seems likely that they might want to spend a night in by a roaring fire. Or perhaps head outside for an evening hike as a family. Or maybe get together with Markle's mom Doria Ragland, who is reportedly spending the holidays with the family. Or maybe a house party with Markle's best friend Jessica Mulroney — if she and her family of five fly in from Toronto, Ontario that could make for a cozy evening.

Whatever the Sussex family does on New Year's Eve to ring in 2020, hopefully they'll have a lovely, peaceful time.