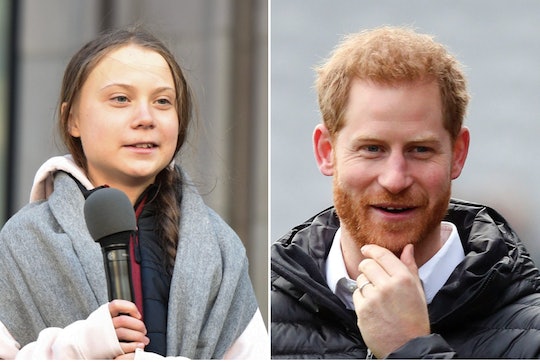 Throughout his royal career, Prince Harry has often used his platform to speak about the importance of environmental conservation. And just recently, he gave a special shout-out to one motivated young activist who's leading a movement on just that. Over the weekend, Prince Harry praised Greta Thunberg's climate change activism and encouraged others follow her lead in a moving speech that will leave you feeling motivated.

Prince Harry attended the first ever OnSide Awards on Sunday, Nov. 17, held to recognize exceptional young people, staff, and volunteers who work with OnSide, an organization that gives young people in the United Kingdom "somewhere to go and something to do." The Duke of Sussex has been a strong supporter of the organization and spoke directly to the youth in a touching speech during the awards ceremony, which was reportedly his final engagement before taking a break to enjoy the holidays with his family, according to Harper's Bazaar.

During his speech, Prince Harry gave a shoutout to Thunberg and the impact she's made in a such a short time. "When Greta started her climate change protest when she was 15 years old — one voice, with just one placard, sitting on her own outside the Swedish parliament," he said. "Many people, actually I should say, many adults...dismissed her. Yet today, millions upon millions of young people have joined her fight."

Indeed, kids from all over the world have been joining Thunberg in her fight to bring more awareness to global climate change, most recently in Charlotte, North Carolina on Friday, Nov. 8. More than 1,200 students in North Carolina and beyond joined Thunberg to ask government officials to do more to combat climate change, according to The Charlotte Observer. What's more, Thunberg's fight has been so powerful that "climate strike" was just named the 2019 word of the year by Collins Dictionary, CNN reported.

"She may have been one person at the beginning, but she had a belief, a mission, and a desire to do something not just for herself, but for everyone — and now the whole world is paying attention," Prince Harry added.

The 16-year-old from Sweden really has inspired so many others to follow her lead and become advocates for climate change awareness. In addition to leading this movement, she's also written a book, she's been nominated for a Nobel Peace Prize, and gave a heartbreaking speech at the United Nations Climate Action Summit in September.

Prince Harry also encouraged young people to find what they're passionate about and take charge like Thunberg. Whether it's getting more educated about climate change, joining a protest, or simply getting involved in more local issues facing their community, there are countless way to evoke change.

"Whatever your dream — every country, every community, every school, every friendship group, every family needs their own Greta," Prince Harry concluded, "someone who can lead the way, someone who is prepared to stand up for what they believe in, and show how much they care for the people in their lives and the community around them."