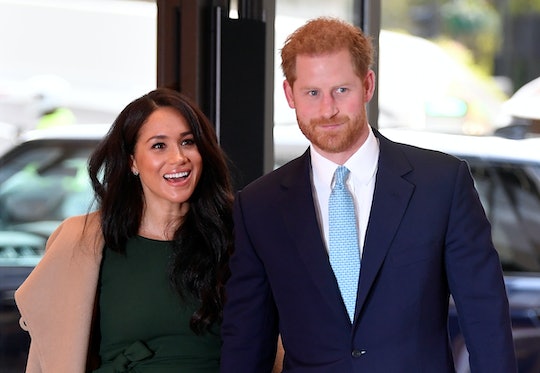 It becomes more evident with every passing day that fatherhood has changed Prince Harry. I think it's safe to say that becoming a parent changes us all, and the Duke of Sussex is certainly no exception. Little Archie seems to have made his father become more clear-eyed, more focused; and more aware of how his own childhood affects the way he sees the world. In an upcoming documentary for ITV, Prince Harry reminisced about Princess Diana. And the new father made it perfectly clear that memories of his own mother still shape him, and can sometimes still leave him shaken.

Prince Harry welcomed his first born child, son Archie Harrison Mountbatten-Windsor, on May 5 with his wife Meghan Markle. The couple have been making every attempt to protect little Archie from constantly being in the public eye, and it seems memories of Archie's grandmother might be one of the reasons behind this decision. The couple recently traveled to Africa with Archie on a royal visit and ITV's Tom Bradby joined them to film a behind-the-scenes documentary of their first official tour as parents. The documentary, which is set to air on Sunday, shared rare interviews of both Prince Harry and Meghan Markle opening up about how the intense scrutiny of living in the spotlight has affected them both. In Prince Harry's case, it has been an all-too-real reminder of his late mother Princess Diana, who died in a car crash in Paris in 1997 at the age of 36 when he was just 12 years old. She was being followed at the time by members of the paparazzi.

As Prince Harry explained in an emotional interview with ITV, his mother's death is a "wound that festers," especially when he has to deal with the constant barrage of media, as per Page Six:

He went on to discuss the impact his mother continues to have on him to this day in the interview, which was held the night before Prince Harry was set to follow in Princess Diana's footsteps through landmines in Angola:

Everything I do reminds me of her. But as I said ― with the role ― with the job and the sort of the pressures that come with that, I get reminded of the bad stuff, unfortunately.

Now that Prince Harry is a father himself, he is taking clear action to ensure he protects his own little family from the "bad stuff" his mother had to endure. While in Africa he announced that he and his wife had initiated a lawsuit against media outlet The Mail On Sunday for publishing a letter Markle had written to her father. As Prince Harry explained in a speech at the time, as per The Guardian, his "deepest fear is that history is repeating itself:"

Though this action may not be the safe one, it is the right one … I’ve seen what happens when someone I love is commoditised to the point that they are no longer treated or seen as a real person. I lost my mother and now I watch my wife falling victim to the same powerful forces.

Becoming a husband and a father has obviously brought out something fierce and protective in Prince Harry. He is going to make sure he doesn't lose someone he loves again... and he should be applauded for it.