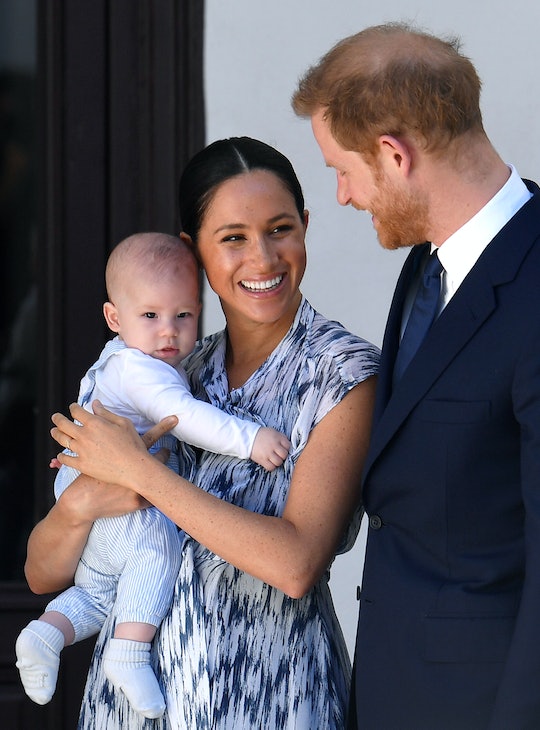 Meghan Markle and Prince Harry have seen massive changes to their lives since the beginning of 2020. As the entire world most certainly knows, the couple have decided to step away from their lives as senior members of the royal family in favor of carving their own paths as a family. Markle has spent the majority of the new year in Canada, where the couple reportedly hope to live at least part of the year. And now Prince Harry has finally reunited with her and Archie after tying up some royal loose ends in the United Kingdom, which means the family can officially start their new life together.

The youngest son of Prince Charles and Princess Diana arrived in Victoria, British Columbia on a commercial flight early on Tuesday, according to The Telegraph. He is returning to Canada after spending a few weeks in the United Kingdom dealing with the aftermath of the couple's announcement on Jan. 8, via their Sussex Royal Instagram page, that revealed they were planning to "step back as ‘senior’ members of the Royal Family and work to become financially independent." After that, his grandmother Queen Elizabeth sat down with him and other members of his family to discuss what their new roles might look like before sharing her approval of their decision, noting in a statement on Saturday that "Harry, Meghan, and Archie will always be much loved members of my family."

And now that Prince Harry is in Canada, specifically Vancouver Island, according to CNN, with his wife and son, they can work towards being a family independent of the Crown as well.

The family spent several weeks on the west coast of Canada over the holidays in November and December, presumably coming to a decision about what they wanted their lives to look like in the future. And in just a few weeks those lives appear to have come into fruition.

Prince Harry and Markle, who were married in 2018, will no longer be referred to as HRH (honorable royal highness) since they have relinquished their royal titles, according to a statement from Buckingham Pakace, and will also stop representing the Queen in an official capacity, giving them both the freedom they've been wanting to devote themselves to their charitable organizations. As Prince Harry himself noted during a recent speech for a charity he started in Africa called Sentebale, he was "certainly not" walking away from charities he had worked so hard to support.

"What I want to make clear is we’re not walking away, and we certainly aren’t walking away from you," he said, according to the BBC. "I was born into this life, and it is a great honor to serve my country and the queen. When I lost my mum 23 years ago, you took me under your wing. You’ve looked out for me for so long, but the media is a powerful force, and my hope is one day our collective support for each other can be more powerful because this is so much bigger than just us."

Prince Harry and Meghan Markle's future plans remain something of a mystery for now, but one thing seems patently clear: they are ready to carve out their own paths together with their little boy.