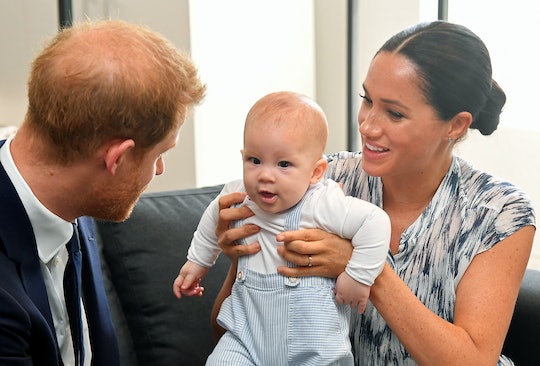 Like families all across globe, Prince Harry, Meghan Markle, and their 11-month-old son Archie have been bunkering down at home due to the ongoing pandemic. And during a virtual chat with some folks from the charity WellChild, Prince Harry revealed that baby Archie is keeping him and Markle plenty busy these days.

Over Easter weekend, the Duke of Sussex sat down for a 30-minute chat with parents and caregivers at WellChild, a charity that works to improve the lives of seriously ill children and the families who are caring for them. Prince Harry, who's been a patron of the charity for more than a decade, admitted that he "can't even begin to imagine" how difficult it might be for parents trying to deal with seriously ill children at home, when he has "just one kid at 11 months old... it's enough." Prince Harry also acknowledged that there are "a hell of a lot of positives that are happening at the same time. "

Archie, who turns 1 year old on May 6, certainly has been getting busier and more mobile recently. Back in November, for example, Markle reportedly revealed that Archie was already starting to crawl and being weaned from breastfeeding, according to the BBC. And in March, Markle told fellow parents at the Endeavour Awards in London that Archie was "into everything" at 10 months old, as People reported.

So it sure sounds like little Archie is keeping his parents on their toes and Prince Harry is loving every single minute of his time with his little boy.