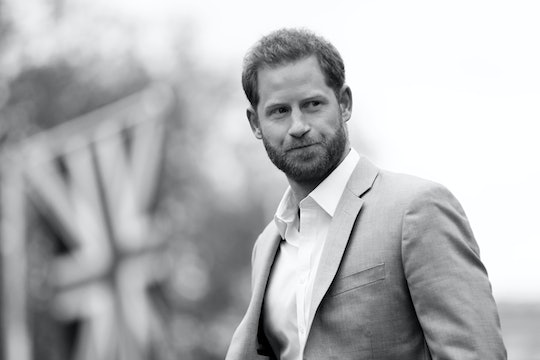 Now that baby Sussex, aka Archie Harrison Mountbatten-Windsor, has finally arrived, reports are beginning to emerge about how the Duke of Sussex is handling fatherhood. Reportedly, Prince Harry is "missing" his mom Princess Diana more than ever now that he's a dad. For many parents who've lost loved ones, his sentiment is likely a relatable one.

Shortly after Prince Harry announced his engagement to Meghan Markle, he talked about missing Princess Diana, who died in a car crash in 1997, according to CNN.

“You know it is days like today when I really miss having her around and miss being able to share the happy news," the Duke of Sussex told the BBC's Mishal Hussain, according to ABC News.

He added: “I think she would be over the moon, jumping up and down, you know so excited for me - but then, as I said, would have probably been best friends with Meghan.”

As if that sentiment wasn't emotional enough, Prince Harry reportedly told a former soldier and aspiring competitor for the 2020 Invictus Games, Dennis van der Stroom, that welcoming Archie into the world on May 6 has made the pain of losing his mom even stronger.

"He said missing a mother is like missing some kind of security, how you need that as a son and it falls away when you lose your mother," Van der Stroom recalled of the conversation, according to the Daily Beast.

Of course, Prince Harry isn't the only high-profile person who misses their mom after having a child.

Actress and comedian Mindy Kaling touched on this feeling in a 2018 Mother's Day tweet, writing: "Happy Mother’s Day to those of us who miss our moms. I have a kid now who is the joy of my life, but each year that goes by there’s even more I want to tell my mom about!"

It's also difficult to grieve a loss in the public eye, a topic comedian Maya Rudolph opened up about in a profile for The New York Times Magazine. Maya, who lost her mom at age seven, explained: “It really didn’t help that it was a public experience. It was weird to grow up that way, thinking, I’m the kid whose mom died, and everybody knows it — or at least you feel like everybody knows it.”

Luckily for Prince Harry, he has the support of Markle to see him through those difficult moments. The Duke of Sussex praised the Duchess of Sussex's supportive nature in a pre-wedding interview, stating, according to The Washington Post:

I know that I’m in love with this girl and I hope that she’s in love with me. But we still had to sit down on the sofa and have some pretty frank conversations with her to say, ‘What you’re letting yourself in for, it’s a big deal. It’s not easy for anybody.’ I know that at the end of the day, she chooses me, and I choose her. And therefore, whatever we have to tackle together, or individually, it’ll always be us together as a team.

Although Prince Harry is overjoyed by fatherhood, it's understandable that the death of Princess Diana reportedly makes him feel these complicated emotions. But with the support of Markle and other loved ones, I have a feeling the Duke of Sussex will be OK.