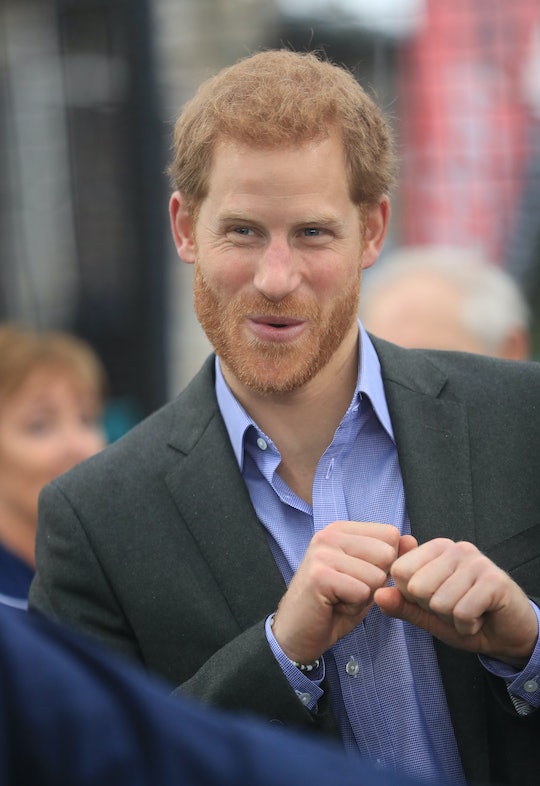 Prince Harry just cracks me up sometimes, he's such a funny little ginger-haired peach. He's always given the impression of being the entertainer of the family. The one who is up for a laugh, as they say, or more to the point wants to make everyone laugh. And since he has married American former actress Meghan Markle, he appears to be honing his performance skills — as evidenced by his recent decision to break into song at an official royal event. As People reported, Prince Harry was caught signing "So Long, Farewell" from The Sound Of Music and this sweet moment seems to be right up his alley these days... he's loving the little forays into drama, which should make him an entertaining dad when the time comes in a few short weeks.

The Duke and Duchess of Sussex were visiting Canada House in London, England in honor of Commonwealth Day on Monday, as reported by ELLE. The two were there to meet some young Canadians who who are making waves in the area of fashion, arts, education, and business. At the end of their visit, the kids all lined up at the top of the stairs to say goodbye to Prince Harry and Meghan Markle, according to People. They all called out "Goodbye" together in unison, which clearly reminded Prince Harry (and if I'm being honest, me) of a certain scene from a certain movie.

How do I know Prince Harry had this scene from The Sound Of Music in mind? Because, as a video of the moment shared on Twitter shows, he looked up at the kids and sang a little line from the song "So Long, Farewell" and it was adorable.

This should make fans happy for a few reasons. First, Prince Harry is quick on his feet with the film references. Second, he is a man who is comfortable with some deep down knowledge of a musical classic. Although I don't know why I'm surprised.

Back in August, according to CNN, he and Markle visited the London production of Hamilton and guess what? He sang a bit of a ditty that night as well — in front of actual musical professionals, that takes some bravado even for a prince.

OK, maybe he only sang two words, "You say..." from the song "You'll Be Back," as TIME reported. But please note the woman's reaction over his left shoulder because she is clearly loving it. One woman who was on hand that night might not have been especially surprised by Prince Harry's impromptu performance. Meghan Markle reportedly told one of the cast members that her husband "loves" to sing songs from Hamilton, according to royal correspondent for The Sun Emily Andrews.

I think Prince Harry is already well on his way to owning his role as the entertaining dad. You know the type — sings all the time, is always around for playing and having fun. And judging from Meghan Markle's reactions to his little performances, I'm going to go out on a limb and say she'll be fine with it. Because as sure as we can be that Prince Harry will crack a joke or sing a little song... I think Meghan Markle's quick smile and laughter proves she is his perfect foil.