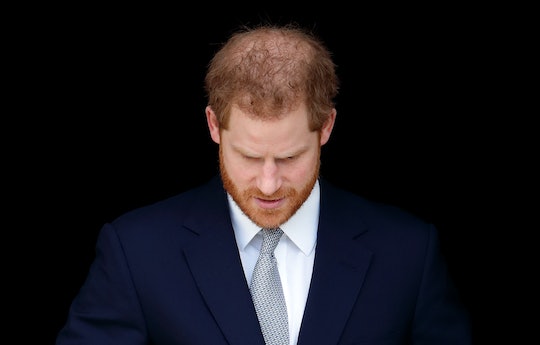 Prince Harry's Wish For His Family Is Heartbreakingly Simple

As both the press and the public continue to criticize the Duke and Duchess of Sussex for stepping back from official royal duties, a close friend has spoken out in their defense. Argentine polo player Nacho Figueras recently told ABC that Prince Harry "suffered a lot" due to public scrutiny and just wants to live a normal life with his wife and son... a heartbreakingly simple desire.

"He has suffered a lot from all of the things that have happened to him," Figueras said in the ABC special Royal Divide: Harry, Meghan, and the Crown. "He suffers a lot from people judging him."

The 35-year-old royal shocked the world earlier this year when he announced that he and wife Meghan Markle decided to step away as senior working members of Britain's royal family. In an attempt to lead a more private life, the couple will cease taking public funding and drop their HRH titles, according to statements released by Buckingham Palace.

In comments to ABC, Figueras said Prince Harry was looking to lead as normal a life as possible for someone in his position. "He wants to live a normal life, as normal as his life is going to be," Figueras said. "Because when you have 1,000 paparazzi outside your house in Canada waiting to get one picture of your son, that's not very normal."

Prince Harry is keen to protect his family from the intense media frenzy that followed his mother, Princess Diana, up until her death in 1997, according to Figueras. "He's being a father," Figueras told ABC, adding that Prince Harry was "a guy who is trying to protect his cub and his lioness from whatever it takes."

Prince Harry has previously brought up the circumstances behind his mother's death when discussing media coverage of his family and his concern for their safety. "Everything that she went through and what happened to her is incredibly raw every single day and that's not me being paranoid that's just me not wanting a repeat of the past," Prince Harry said in an interview for ABC's Harry & Meghan: An African Journey documentary. "And if anybody else knew what I knew, be it a father, be it a husband, be it anyone, you'd probably be doing exactly what I’m doing as well."

Figueras told ABC that Prince Harry, who is now staying in Canada with Markle and their son Archie, is focused on trying to keep his family safe. "He has become an incredible man, a man that his mother would be proud of," the polo player said. "He's protecting his family, he's protecting his wife and child."

Diana would be proud indeed.