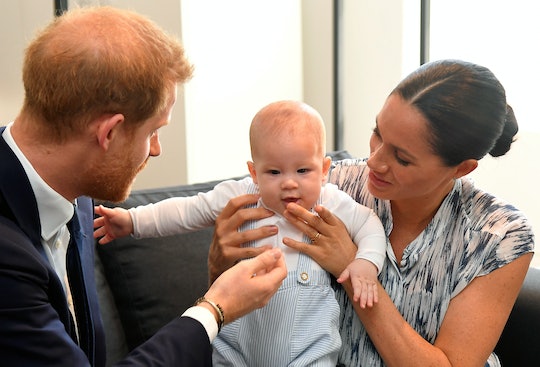 Prince Harry has always struck me as the sort of man who would find real joy and contentment in having a family. Perhaps it was seeing how he interacted with children at royal functions over the years or the way he seemed to admire his brother Prince William's family with Kate Middleton. Whatever the case, the Duke of Sussex has long given the impression of a man who wants a family. And now that he has one, Prince Harry said he "will always protect his family" in a new documentary airing in the United States tonight.

Prince Harry married former American actress Meghan Markle in May 2018 and the couple became parents to baby boy Archie a year later, on May 6, 2019. While this should be a beautiful time for any new couple (and I'm sure there are plenty of times when it has been lovely), the Duke and Duchess of Sussex have spent the first years of marriage dealing with an overwhelming amount of media scrutiny. Markle in particular, actually, as a newcomer to the British royal family, has been under constant attack from the British tabloids.

Neither Markle nor Prince Harry have spoken about how wearing that scrutiny has been on either of them until recently, when they filmed a documentary about their 10-day tour of Africa called Harry & Meghan: An African Journey with ITV's Tom Bradby.

As Bradby interviewed Prince Harry one night in Africa, the new father opened up about wanting to protect his family in an especially vulnerable moment. He explained to Bradby that part of his "job" as a member of the royal family is "putting on a brave face."

"But, again, for me and for my wife..." Prince Harry told Bradby, "of course there's a lot of stuff that hurts. Especially when the majority is untrue. What we need to do is focus on being real and being the people we are."

He went on to point out that he wouldn't be "bullied" into playing a game that contributed to the death of his mother, Princess Diana, who died in a car crash in Paris in 1997 as she was being chased by members of the paparazzi. Because of that terrible memory, Prince Harry told Bradby: "I will always protect my family and now I have a family to protect."

To that end, Prince Harry and Markle have opened a lawsuit against British tabloid The Mail on Sunday after the media outlet published a personal letter Markle had written to her father, Thomas Markle.

It has been a difficult road for the couple, and even Bradby told Good Morning America recently that he found Prince Harry and Markle to be "a bit bruised and vulnerable" on their royal tour.

No wonder Prince Harry is feeling especially protective of his wife and child. He finally has a little family, and all he seems to want to do is be allowed to love and protect that family in peace. And hopefully the media, outsiders, and more allow him that chance.