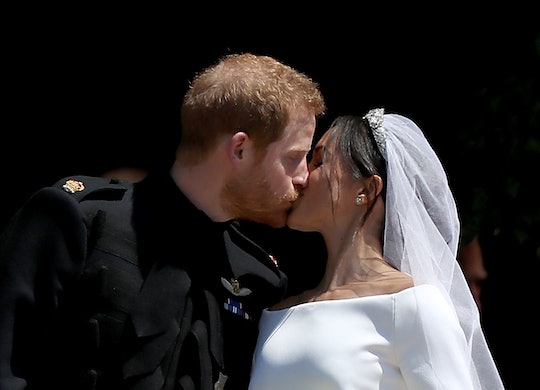 So Prince Harry and Meghan Markle, the Duke and Duchess of Sussex, are finally married, and Prince William and Kate Middleton have already produced three offspring, so you know what comes next... or what we're hoping comes next, at any rate. It may not be necessary in order to keep the line of succession intact, but the public wants to see a new little prince or princess from the newlyweds. And Prince Harry's baby photos could provide us with an idea of what the little prospective royal infant will look like.

We've all been inundated with baby and childhood pics of the Duchess of Sussex over the last couple months — no shocker there, she was a gorgeous tot — so let's cross-reference those with pics of her husband, and see if we can formulate a mental picture of their future spawn.

Of course, it's not as if the newly-named Duke grew up in relative obscurity or anything, but it's been a while now, and we didn't even have the internet back in 1984, so unless your mom keeps decades-old People magazines in her bathroom (or she was one of those Diana die-hards who bought every photo book and gilded collector plate she could get her hands on), you might not know what Harry looked like as a child, so let's dig in.

As you can see in this shot of Harry in his mother's arms in 1985, that shock of red hair was there from the start, although it clearly darkened considerably over time. It's a recessive trait, so Markle will need to carry a copy of the MC1R gene, as well, if their future child is to be a ginger.

We already knew that Kate Middleton is a skilled ametueur photographer, but did you realize that she incorporates sweet family traditions into her pics of her children? When then-toddler Prince George introduced his baby sister, Princess Charlotte, to the world, they posed just like their dad and uncle did 31 years prior. And when Charlotte posed for a similar portrait with Prince Louis earlier this year, Kate dressed Louis in Charlotte's old onesie, while Charlotte donned a cardigan once owned by George. So sweet!

Obviously, William is stealing the scene a bit here, but you can make out a surprisingly calm Harry patiently waiting with Mum for the photographer to get on with his official baptism pics.

As they grew up together, William and Harry were not only brothers, but best friends, and each others' constant companions. Here they are playing dress-up years before they'd become Squadron Leaders William and Harry Wales of the Royal British Ar Force.

Here's the little prince on his first day of kindergarten. If you're among the many royal watchers who's constantly wondering why George dresses in such weird, old-timey clothes, I beg of you to get a load of those shoes, and remember that it could be much, much worse.

On a Caribbean vacation in 1993, Harry's traveling companions glare stoically at the paparazzi as if to say, "I'm not allowed to look outwardly pissed off at you, but I totally am." Harry's face, however, betrays a hint of a smirk that I'm hoping he'll pass on to future generations.

And just as his nephew is famously known to do, Harry once peered out of Buckingham palace's windows during official events, reminding everyone that they may be royalty, but they're also just curious kids, as well.

On a sleigh ride with Wills and Mum, Harry's grin of pure joy is absolutely infectious. As a matter of fact, I hope his kids inherit all his facial expressions.

OK, so this is far from a baby picture, but I had to include it for two reasons: first of all, to show that grin again. And secondly, of course, because the Spice Girls are awesome. What a lucky boy. I hope his kids get to meet them, too.