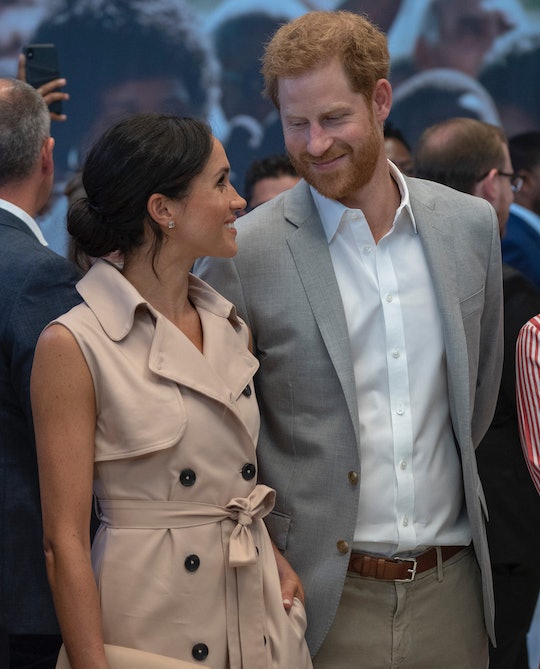 Prince Harry and Meghan Markle are spending their first Valentine's Day apart and this probably seems like a bigger deal than it actually is. Sure, it would have been nice for the couple to spend the day together doing a bunch of romantic things around the palace, especially since they are expecting their first baby so soon. But life as a member of the royal family means you are frequently on duty, and such was the case for the Duke of Sussex on Thursday. But don't worry, something pretty special happened. Prince Harry's first Valentine's Day as a married man might not have been with his wife, but the people of Norway managed to make it uniquely romantic for him nonetheless.

Prince Harry is in Norway at the Arctic Circle for Valentine's Day on official duty, according to The Mirror, meeting members of the British armed forces who are there learning to do winter survival training for Exercise Clockwork. Not exactly a romantic roast chicken dinner in front of a roaring fire, but don't feel too bad for him.

While his wife remained back in London, according to Vanity Fair, I'm fairly certain she was close in his thoughts. Because while the prince, a former military man himself, was touring the base, he came upon a makeshift igloo that had essentially been decorated as a "shrine" to him and his wife, as the Daily Mail's Rebecca English shared on Twitter.

The troops had decorated a snow shelter with images from Prince Harry's royal wedding at Windsor Castle and even lit some romantic candles to set the mood. For his part, Prince Harry laughed and looked a little embarrassed, noting in the English's video that it felt "weird" to look around and see all those pictures of himself.

I think he secretly loved it though. He was probably just sad not to have his wife with him, especially since she's apparently a real sucker for Valentine's Day. As The Daily Mirror reported, she once wrote on her now defunct lifestyle site The Tig that she wakes up every Valentine's Day "waiting with bated breath to be dipped into a kiss." Maybe Prince Harry was thinking of that in the shrine?

It's a shame the couple can't be together for Valentine's Day this year, but let's face it — they've got some pretty exciting stuff in the works to look forward to.

They're moving into their own home, the 10-bedroom Frogmore Cottage on the grounds of Windsor Castle, in the coming weeks, as The Week reported. They are reportedly heading to Morocco for an official royal visit, according to Hello! Magazine, that could also be a mini-babymoon if they use their imagination. And oh yes... they're having a baby within the next month or two.

We don't know if the two of them perhaps enjoyed a little pre-Valentine's Day celebration on Wednesday. Or perhaps they have plans when Prince Harry arrives back home. But if they don't manage to find time to celebrate, at least Prince Harry will be able to enjoy the memory of that time a bunch of troops on the Arctic Circle tried to make a romantic shrine for him.